Home / WORLD / ‘Our proud reputation in the world is in tatters:’ Obama unloads on Trump as Biden lies low amid ‘laptop’ scandal

‘Our proud reputation in the world is in tatters:’ Obama unloads on Trump as Biden lies low amid ‘laptop’ scandal 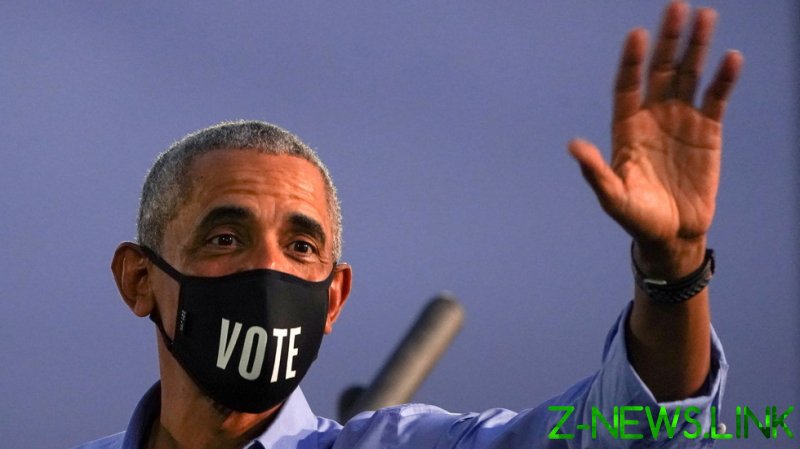 While the Democratic hopeful has shunned publicity for the last couple of days ahead of the final presidential debate on Thursday, Obama took up the baton, addressing a relatively small crowd of Biden supporters at a drive-in rally outside Citizens Bank Park in South Philadelphia on Wednesday evening.

Taking a shot at his former VP’s Republican rival, Obama argued that Trump was “treating the presidency like a reality show” and that his prime concern is to remain in the spotlight.

“I’ve never thought Donald Trump would embrace my vision or continue my policies, but I did hope for the sake of the country that he would show some interest in taking the job seriously, but it hasn’t happened,” Obama charged, adding that Trump is “upset” that the ratings for his “show” are down.

But this thing is this is not a reality show, this is reality

Obama went on to lambast Trump on his handling of the coronavirus pandemic, arguing that he “proved himself incapable” of taking the job seriously while referring to some 220,000 Covid-19 deaths in the US.

He then proceeded to blame the closure of “more than 100,000 small businesses” and the loss of “millions of jobs” on the Trump administration’s coronavirus response. Trump has accused governors of Democrat-run states of keeping sweeping lockdowns in place and even voiced support for anti-lockdown rallies, arguing that remaining restrictions on businesses were the reason for the slow economic recovery.

“Four years ago you’d be tailgating here in the lake instead of watching a speech from your cars,” Obama said to the round of applause and honks from the audience. Democratic Philadelphia Mayor Jim Kenney imposed a moratorium on gatherings of 50 people or more on public property already in July. The ban is to stay in place through February next year.

In his tirade, Obama accused Trump of single-handedly tarnishing America’s good name in the international arena, lamenting that “Our proud reputation around the world is in tatters.” Polls taken this month in seven allied European countries indeed have shown that Europe prefers Biden over Trump as the next US president by a margin of 67 percent to 14 percent. The data was immediately pounced on by the US mainstream media as proof that Trump’s ‘America First’ policy has alienated allies.

While Trump has repeatedly argued that Biden would be soft on Beijing, saying at a rally on Wednesday that “if Biden wins, China will own the United States,” Obama attempted to turn the tables, seizing on a New York Times report alleging that one of the president’s businesses – Trump International Hotels Management LLC – maintains a bank account in China.

The attack from Obama comes as the Biden campaign deals with fallout from a New York Post report last week, which posited that Biden’s son Hunter wanted to enrich his family through his connections to the Shanghai-based CEFC China Energy Co. and that he had questionable business dealings with a Ukrainian energy firm, Burisma.

The revelations stem from a trove of emails stored on a laptop allegedly belonging to Hunter Biden. A copy of its hard drive was given to both Trump’s personal lawyer Rudi Giuliani and the FBI by a Delaware repair shop owner, who claims the damaged laptop was left at his business to be fixed, but that Hunter never returned to retrieve the computer. Giuliani then provided the drive to the New York Post.

After remaining mostly silent on the story for more than a week, on Wednesday Biden broke his silence on the allegations, denouncing them as a “desperate campaign to smear me and my family” in a remote interview with an ABC affiliate.