‘Our intel was better’: IDF brags about killing top Hamas spies, as retaliatory strikes blamed for deaths of Arab woman & 7yo girl 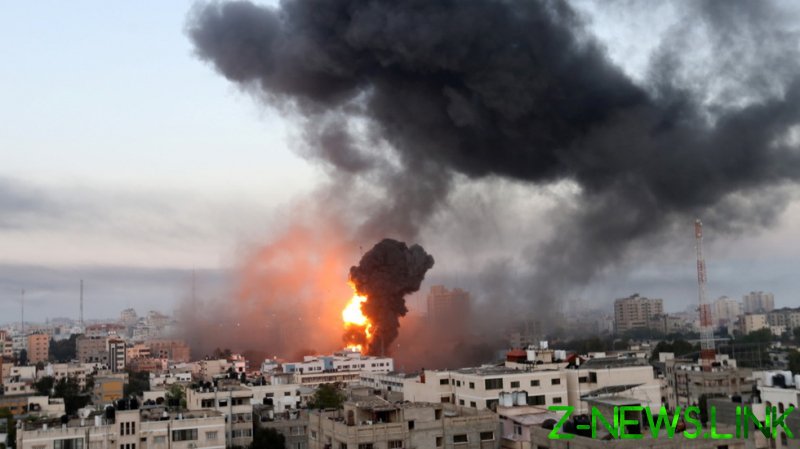 The IDF boasted of the targeted assassination strikes in a tweet early on Wednesday morning, which it said it conducted alongside Israel’s internal security service, the ISA, commonly known as the Shin Bet.

Earlier on Wednesday morning, the IDF shared footage of a previous airstrike, which it said hit a Hamas “intelligence headquarters” and “information center.” It is unclear if the two operatives were killed in that strike, however.

The bombardment of Gaza comes amid two days of intense fighting, seeing flurries of rockets launched into Israeli territory and more than a hundred strikes by Israeli warplanes in the blockaded Palestinian enclave, inflicting major damage on several large structures. At least 35 Palestinians, including 12 children, have reportedly been killed in the bombing, while five people died in Hamas rocket attacks.

A rocket barrage on the Israeli city of Lod, whose population is about one-third Arab, left two Israeli-Arabs dead earlier on Wednesday night, according to Mayor Yair Revivo, who pinned the deaths on Hamas, saying its “missiles do not differentiate between Jews and Arabs.” The casualties included a woman in her 40s found dead at the scene, and a 7-year-old girl, who later succumbed to her injuries at a hospital, local media reported.

A major bout of rioting and unrest erupted among Lod’s Arab residents throughout Tuesday night, as anger over planned evictions of Palestinians in occupied East Jerusalem boiled over into violence. After local officials requested assistance from the national government, Israeli Prime Minister Benjamin Netanyahu deployed additional security forces to the city, vowing to “restore order.”