Home / WORLD / ‘Our focus was to get Trump out of office’: CNN technical director admits network is ‘PROPAGANDA’ in new Project Veritas VIDEO

‘Our focus was to get Trump out of office’: CNN technical director admits network is ‘PROPAGANDA’ in new Project Veritas VIDEO 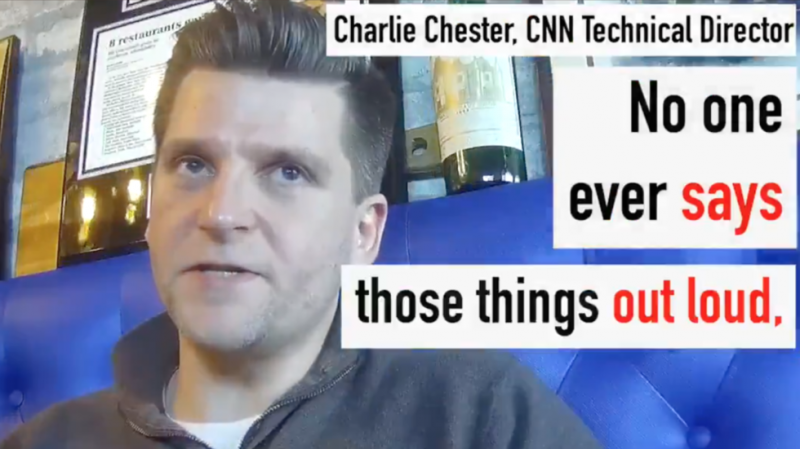 In a conversation with a Project Veritas journalist, Chester can be seen on video admitting CNN worked to make Trump look “unfit for office,” while simultaneously portraying Biden as healthy to combat fears the 78-year-old was not up to holding the presidency.

“Look what we did, we [CNN] got Trump out. I am 100% going to say it, and I 100% believe that if it wasn’t for CNN, I don’t know that Trump would have got voted out…I came to CNN because I wanted to be a part of that,” Chester says in the video.

He also detailed bringing in “medical people” to tell a story that was “all speculation” about Trump’s hand shaking.

“We were creating a story there that we didn’t know anything about. That’s what – I think that’s propaganda,” he said.

Chester revealed the opposite was done for Biden during the 2020 presidential race.

“We would always show shots of him [Biden] jogging and that [he’s] healthy, you know, and him in aviator shades. Like you paint him as a young geriatric,” he said, saying the strategy was a “deflection” of his age and numerous public gaffes.

Another from outspoken Trump critic Jim Acosta in October read: ‘Trump’s doctors paint a rosy – but vague – picture of his health during Covid-19 treatment’.

The CNN employee also claimed his network’s strategy as it moves away from Covid-19 coverage is to shift to a focus on climate change.

“It’s going to be our [CNN’s] focus. Like our focus was to get Trump out of office, right? Without saying it, that’s what it was, right? So, our next thing is going to be climate change awareness,” he said.

Chester added he doesn’t specifically know what that coverage looks like, but it will likely include fear-mongering videos of “the effects it’s having on the economy,” as well as “decline in ice” and “weather warming.”

Chester revealed the person deciding all of this slanted coverage is CNN head Jeff Zucker.

The network had not reacted to the video at the time of this article’s publication. However, a source close to CNN told Mediaite Chester was targeted through the dating app Tinder, which included the detail that he worked for the channel.

Critics of CNN have already capitalized on the undercover video, citing it as evidence of long-held beliefs that the network funnels stories to fit a specific political agenda.