OSCE noticed a large concentration of tanks and “Grad” militants 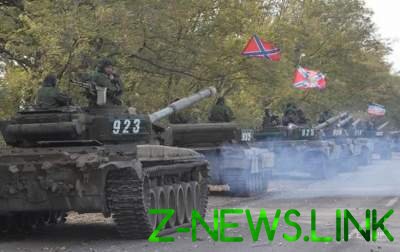 More than 100 units of armored vehicles is in the area of Miusinsk.

The drone of observers Special monitoring mission of OSCE on Donbass recorded 14 jet systems of volley fire and 19 tanks under temporarily not Miusynsk in Luhansk region. This is stated in the situation report of the OSCE.

So, October 23, MLRS unknown type were located approximately 6 km South-East from the temporarily occupied Miusinsk 62 km South-West from Lugansk and were placed there in violation of the relevant withdrawal lines.

In addition, the drone of the OSCE has recorded 22 howitzers (self-propelled 10 and 12 buklirovannye ed.), 19 unknown type of tanks and nearly 100 armoured vehicles of the military type is about 6 km South-East of Miusinsk.

“On October 25, the team of SMM saw three tanks, one T-64 and two T-72 on a pallet, which followed in a northerly direction in Lugansk. Observers noted that the cargo platform carrying the tanks at the service station, located across the street from the Central bus station”, – said the OSCE.