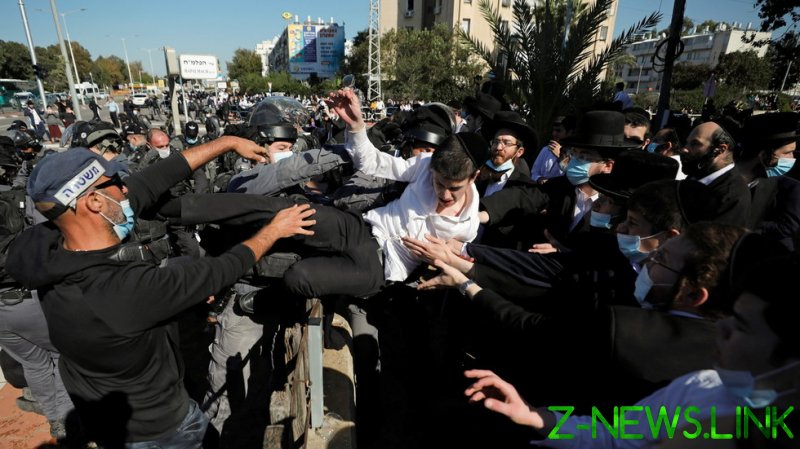 On Sunday morning, hundreds of Orthodox believers gathered to defend the yeshiva in Jerusalem’s neighborhood of Mea Shearim, a Haredi stronghold in the city. Religious schools that teach the Talmud and the Torah sacred texts are scheduled to open for in-person studies this week, which contradicts the restrictions by the government of PM Benjamin Netanyahu.

As soon as the police arrived, the protesters began tossing foreign objects at the officers and shouting obscenities. They labeled the police “Nazis” and “kapos” – Jews that collaborated with Hitler’s forces during World War II.

There were clashes, which resulted in at least one arrest. The police ended up deploying water cannons to disperse the crowd.

Tensions were also high in the Mediterranean city of Ashdod where dozens of Haredi tried breaking into a local religious school.

The scuffles saw four officers injured and four troublemakers detained, the police said. The demonstrators also blocked traffic and damaged the fence around the yeshiva.

A shocking video from the scene shows a police officer grabbing a young Haredi school boy and throwing him to the pavement before picking him up again and tossing him into the crowd.

Clashes, in which dozens were involved, also were reported in the mainly Haredi town of Bnei Brak.

On Saturday, the leader of the local religious sect, Rabbi Yisroel Hager, called for schools to reopen, saying that it was “crucial” for his community. However, he retracted his words several hours later, instead urging his followers to abide by health regulations and get vaccinated.

Following the unrest on Sunday, the police reiterated that it will continue to enforce anti-coronavirus measures “in all communities” despite the protests. The lockdown in Israel, which among other things orders the closure of all educational institutions, will be in place until at least January 31.

Orthodox Jews have been actively protesting against the Covid-19 restrictions, which hinder their religious practices, since the start of the pandemic, with clashes and arrests happening on a regular basis. At the same time, the Haredi has become one of the groups hardest hit by the virus, with experts blaming neglecting health regulations and the large sizes of their families for such a scenario.