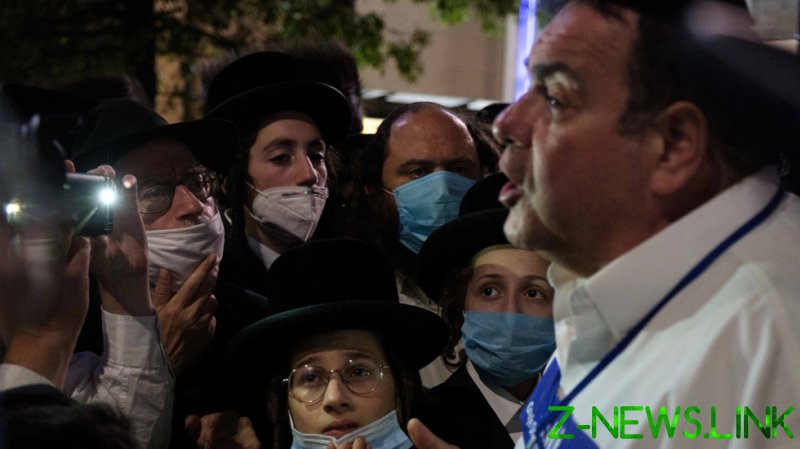 “Harold ‘Heshy’ Tischler has been charged with inciting to riot and unlawful imprisonment in connection with an assault of a journalist,” the New York City Police Department reported on Sunday.

A video of Tischler’s arrest late Sunday shows several officers taking the Brooklyn community activist and radio host into custody on the street.

This hardly came as a surprise since the activist himself teased his looming arrest in a video posted on social media. However, Tischler indicated that he would be arrested on Monday, rather than over the weekend.

Geoffrey A. Davis, president of the James E. Davis Stop Violence Foundation, a non-profit, tweeted on Sunday that “there was a clear understanding” that Tischler was going to turn himself in on Monday and that he was supposed to escort him to the station.

“Arresting him tonight was low and unhelpful,” Davis tweeted.

Tischler said that he would be surrendering to police amid accusations that he goaded participants of his anti-lockdown rally in Brooklyn on Wednesday to attack an Orthodox Jewish journalist – Jacob Kornbluh.

Tischler has repeatedly accused Kornbluh of being “a snitch” for drawing the authorities’ attention to violations of the coronavirus restrictions by the community.

At Wednesday’s rally, Tischler confronted Kornbluh yet again in a tense standoff. A video from the protest shows Kornbluh being mobbed and heckled by demonstrators, who called him a ‘moser’, a term for a Jew who informs on another Jew, as Kornbluh pleads with the protesters not to spit on him.

Kornbluh claimed that he was “hit in the head, and kicked at by an angry crowd” at the protest.

Tischler denied the allegations, accusing the Jewish Insider journalist of lying that he was “brutally assaulted” and changing his narrative.

Shortly after news of Tischler’s arrest spread, a group of demonstrators, some with Trump/Pence campaign flags, turned out in Borough Park to protest his arrest.

In the meantime, several dozen protesters flocked to what is believed to be Kornbluh’s apartment, chanting “shame on you!”

The arrest comes after Governor Cuomo attacked President Donald Trump for supposedly fueling the Orthodox Jewish uprising based on a prank call in which Tischler’s name was mentioned. The caller urged demonstrators to show up at anti-lockdown protests with signs reading “Cuomo killed thousands” that should be “as big as possible.”

The Trump campaign and Tischler both denied involvement in the call. Tischler said he contacted the caller, who told him that he uploaded the audio message to WhatsApp to play a prank on his friends, and did not mean anything sinister.