Home / WORLD / Opium of the masses: Russia’s Communists are flirting with faith in God but, in upcoming elections, can they hope for a miracle?

Opium of the masses: Russia’s Communists are flirting with faith in God but, in upcoming elections, can they hope for a miracle? 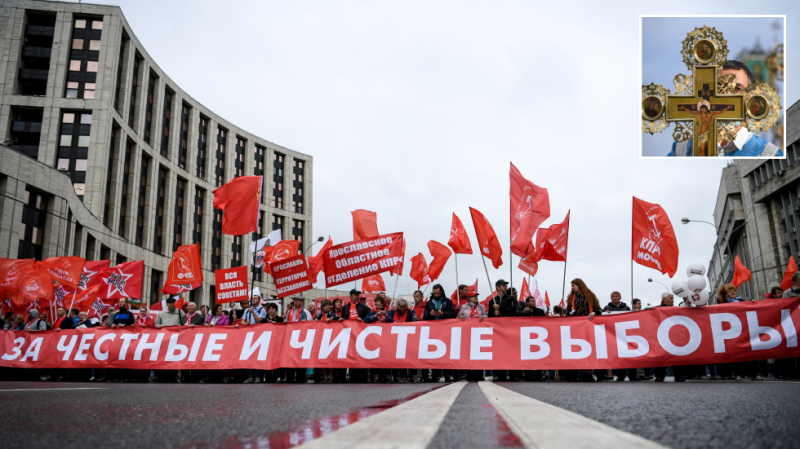 In the aftermath of the 1917 revolution, and during the “Great Terror” of 1937/38, Soviet communists declared war on religious belief, razed churches to the ground and murdered priests by the thousand. Communism’s hostility to religion, and particularly to the Russian Orthodox Church, isn’t just a matter of historical record – it is etched into the collective memory of the country.

It is therefore somewhat surprising to hear the leader of the modern-day Communist Party of the Russian Federation (KPRF), Gennady Zyuganov, put a rather different spin on things. Jesus was the first communist, Zyuganov told the newspaper Komsomolskaya Pravda on Thursday. “Put Jesus’ Sermon on the Mount and the Moral Code of the Builder of Communism next to each other, and you will just gasp… We need to study the Bible,” he said.

Somewhat startling it may be, but it’s not unprecedented. Zyuganov has been saying this sort of thing for some time. Indeed, he wrote of the parallels between the Sermon on the Mount and the Moral Code of the Builder of Communism as far back as 2011. And he’s not alone. Russian President Vladimir Putin has done the same. “The Moral Code of the Builder of Communism, if you read it, is just a pathetic copy of the Bible… the same commandments, just that they are written in a simple language shortened drastically,” Putin said in 2013.

Still, it is striking how today’s communists have chosen to wrap themselves in the clothing of Orthodox Christianity. Similarly, they have discarded such essential tenets of communist teaching as the class struggle and internationalism in favour of national unity and flag-waving patriotism. With elections to the Russian parliament just two weeks away, and with the Communist Party polling well above its total in the last elections five years ago, it’s worth taking a look at how all this came about.

The transformation of the Communist Party began in the dying months of the Soviet Union when Zyuganov, in alliance with patriotic activists such as Aleksandr Prokhanov, sought to revive the party’s flagging fortunes by melding elements of communism with Russian nationalism and elements of pre-revolutionary tradition. In a November 1991 interview, Zyuganov laid out four principles that he considered necessary for any successful political movement in Russia: social justice, popular rule (narodovlastie), statehood (gosudarstvennost’) and patriotism. These have remained the foundation of his political doctrine ever since.

In the process, Zyuganov has looked for inspiration from sources long banned in the Soviet Union due to their anti-communist sentiments. In a short political autobiography published in 1997, he included a long quotation from the deeply anti-Soviet emigre philosopher Ivan Ilyin, before urging readers to draw lessons from the likes of the reactionary Tsarist-era writer Konstantin Leontiev, emigre thinker Nikolai Berdyaev (forcibly expelled from the Soviet Union in 1922) and mathematician-cum-theologian Pavel Florensky (executed by the Soviet secret police in 1937). As a reading list for communists, it’s very odd indeed.

Zyuganov has also looked further back in time, to the mid-19th century Slavophiles and the institution of the peasant commune. Capitalism, says Zyuganov, “does not go organically into the flesh and blood, the daily life, the customs and psychology of our society.” According to him, Russia has a collective mentality, personified by the commune and the Slavophile concept of sobornost’, an untranslatable term that seeks to describe a system in which people reach and obey collective decisions, made possible by a shared value system (traditionally associated with the Orthodox religion).

From this, in the mid-1990s, Zyuganov developed the idea that Russia was a unique civilization, separate from the West, and as such entitled to its own path of development. This required it to resist Westernization and liberalization, stand up for its national interests and defend its sovereignty.

The resulting ideology is what has been called “left conservatism” – “left” because of its commitment to social justice, and “conservative” because of its reference to tradition and the right to a separate path of development.

What’s remarkable about this ideology, which provided the basis for Zyuganov’s 1996 presidential campaign against Boris Yeltsin, is how closely it coincides with what has become the political norm in the Russia of today. Ideas that Russia is a unique civilization, that it is under attack from Western liberalism, that it must strengthen its sovereignty, that it must defend “traditional” religious values, and so on, are now pretty much the mainstream.

Indeed, all the political parties who have a reasonable hope of winning seats in this month’s parliamentary elections fit comfortably within this left conservative paradigm. The pro-Putin United Russia party is the most moderate in this regard. The Communists regard both it and Putin as insufficiently anti-liberal and anti-Western. They also reject what they call the “comprador capitalist” system created in the 1990s, which Putin has been content to leave largely intact.

These differences are fairly minor, however. All the large political groupings in Russia have now moved into the territory Zyuganov marked out as his own in the 1990s. But with everybody else mimicking his effort to synthesize Reds, Whites, Orthodoxy, Tsarism, Slavophilism and anything else that could be considered part of Russian tradition into a single whole, Zyuganov and the Communist Party no longer have a unique selling point that would give people a reason to vote for them. If you want all that stuff, you can get it from others without all the negative baggage that comes with the word “communist.”

All this means that in some ways Zyuganov has already won – once on the fringe, his ideas have become mainstream. It’s unlikely, though, that either he or the Communist Party will see any major miracles at the ballot box.