Home / WORLD / Only we can lock up journalists and get away with it, UK embassy warns China

Only we can lock up journalists and get away with it, UK embassy warns China 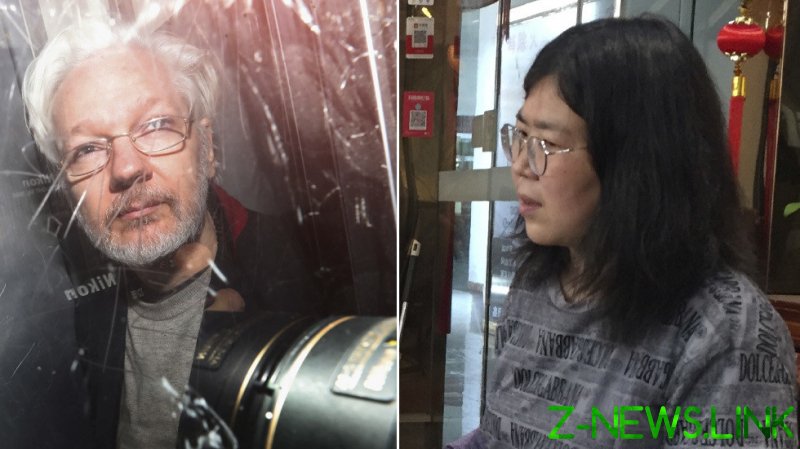 The British embassy in Beijing published a scathing statement against China for sentencing a citizen journalist to four years in prison on Monday, raising concerns about “media freedom” in the country.

What it failed to mention, however, is that back at home the British government is currently persecuting its own journalist – WikiLeaks founder Julian Assange.

“The case of Zhang Zhan – who was arrested for her reporting on Covid-19 in Wuhan earlier this year and today sentenced to four years – raises serious concerns about media freedom in China,” declared the embassy, adding that Zhang is “one of at least 47 journalists currently in detention in China.”

“We urge China to release all those detained for their reporting,” the embassy concluded, tagging its statement with the Twitter hashtag “#DefendMediaFreedom” for one final level of irony.

The statement was shared by CNN anchor Jake Tapper and Deborah Haynes, the foreign affairs editor for Rupert Murdoch’s Sky News, but ultimately demonstrated the hypocritical and supremacist worldview that countries like the United Kingdom and the United States have always held: that persecution and the violation of human rights is only okay if we’re the ones doing it.

Assange, who sparked a number of high-profile government scandals with his exposés since WikiLeaks’ conception in 2006, is currently sitting in a cell in the UK’s notorious Belmarsh Prison – home to some of the worst scum and villainy in British history – awaiting extradition to the United States, a country he has never even lived in.

With prison mates like neo-Nazi terrorist David Copeland, Lee Rigby murderers Michael Adebolajo and Michael Adebowale, and a plethora of pedophiles and serial rapists, one would naturally assume that Assange’s crimes must have been beyond the pale. But his perceived transgressions were the same as almost every journalist who has ever been persecuted by a government in the course of their duty – holding power to account.

To put it simply, Assange made both the UK and the US look like a pair of tits – the same thing that Zhang arguably did to China with her citizen journalism from Wuhan during the country’s struggle with Covid-19.

After exposing the criminality of both the UK and the US governments time and time again – one notable example being the 2007 video of a US Apache helicopter firing on two Reuters journalists in Iraq –  they decided that something had to be done, and the result was Assange’s current, unfortunate situation –  locking the messenger away and throwing away the key so that no one would be able to listen to him again.

Zhang has been sentenced to four years in prison for her transgressions. Assange has been shut away for over eight, and he hasn’t even been extradited yet.

For the crime of holding power accountable, Assange spent nearly seven years under house arrest in the Ecuadorian embassy in London to avoid extradition –  where he was under secret surveillance – until authorities stormed the embassy in 2019 and whisked him off to Belmarsh.

His health has suffered, with the WikiLeaks founder alleging “inhumane” treatment in prison, and he has been separated from his fiancé and kids.

And even then, his brutal treatment was and remains a bit of a compromise. After all, it was alleged that former US Secretary of State Hillary Clinton had proposed droning Assange in the Ecuadorian embassy, and that the US government wanted to “kill Julian Assange and make it look like an accident.”

Negotiations had to take place to even ensure that the US government wouldn’t sentence Assange to death upon his arrival on US soil, though he could very well still end up dying if his health continues to spiral in captivity.

The cases of Julian Assange and Zhang Zhan are both similar, and yet wildly different. The most obvious difference is that only a tag-team of bullies like the UK or the US would have the gall to condemn another country for doing something they see no problem with doing themselves, so long as it maintains their hold on world domination.