Home / WORLD / Only the VACCINATED will be saved? Confusion after St. Vincent PM says only those with Covid jab can flee VOLCANO on cruise ships

Only the VACCINATED will be saved? Confusion after St. Vincent PM says only those with Covid jab can flee VOLCANO on cruise ships 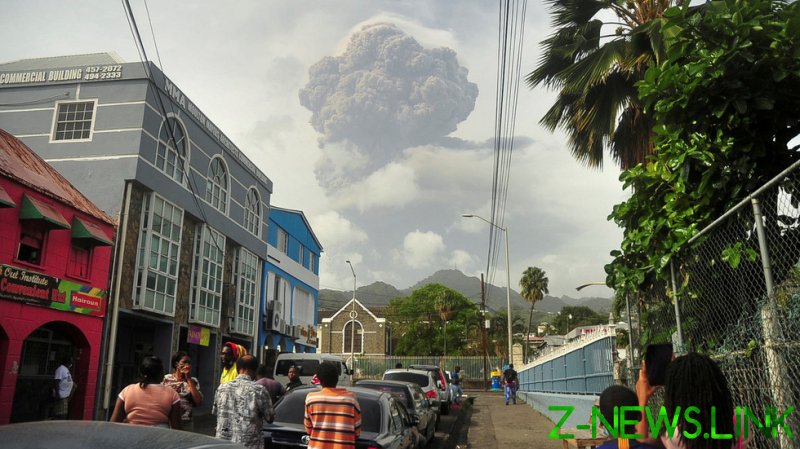 The La Soufriere volcano on the eastern Caribbean island of St. Vincent erupted on Friday, sending a column of ash 10km into the sky. With some 16,000 people living in the ‘red zone’ near the volcano, the authorities had been scrambling to put together evacuation plans in the hours leading up to the blast.

For viewers following the evacuation effort through television news reports, one detail of the plan may have stood out. “Cruise ships are evacuating people from the island,” CBS News’ Norah O’Donnell announced on Friday, adding that “only those vaccinated against Covid” would be allowed to leave.

The clip, which has since raised some eyebrows online, turned out to be factually correct. St. Vincent and the Grenadines’ prime minister, Ralph Gonsalves, did announce in a press conference that evacuees would need to receive a Covid shot before boarding any of the two Royal Caribbean cruise ships and two Carnival Cruise Line’s vessels that arrived on Friday.

Furthermore, Gonsalves said that the neighboring islands of St. Lucia, Grenada, Barbados, and Antigua would accept evacuees, but only if they had been vaccinated.

However, despite Gonsalves’ announcement, neither Royal Caribbean nor Carnival Cruise Line have mentioned anything about keeping unvaccinated passengers off their ships. Royal Caribbean did say that “all precautions will be taken to protect the health and safety of the crew and passengers who board our ships,” but did not elaborate further. Nor have the governments of the aforementioned islands released any official statements clarifying whether or not they would accept unvaccinated evacuees.

Further complicating matters is the fact that St. Vincent received its first shipment of vaccines only two days before the eruption. Throughout the pandemic, St. Vincent and the Grenadines has recorded only 1,789 cases of Covid-19 and 10 deaths, according to figures from the World Health Organization.