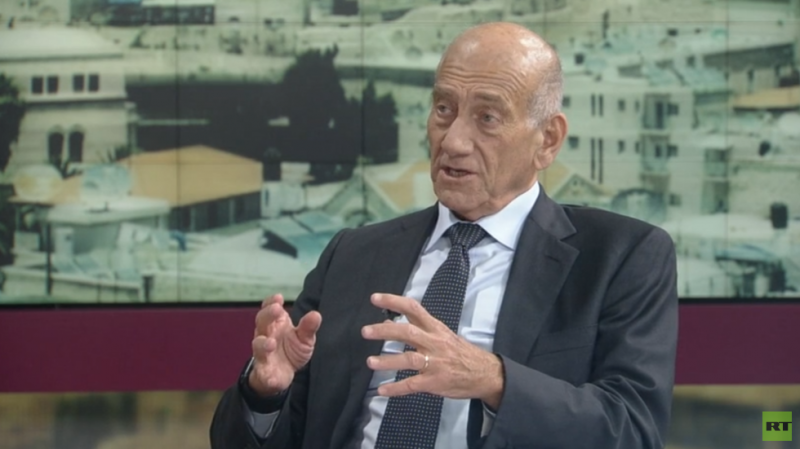 Speaking to RT’s Kevin Owen on Wednesday, Olmert neither agreed with nor rejected the widely-rumored idea that the new Israeli-Palestinian escalation has been deliberately orchestrated by Netanyahu to stay in power. But he said such a plan, even if it existed, was unlikely to work, given Netanyahu’s repeated political failures and dwindling support base.

“I think that the fact he has failed to form the cabinet after four consecutive elections which took place within less than two years – and I think if there will be the fifth round it will be the end of Netanyahu’s [rule],” Olmert, a long-time critic of the embattled prime minister, added.

The latest flare-up between the Israeli military and the Hamas militants has been raging for over a week already, with the two sides exchanging rockets on a daily basis. Some 4,000 missiles have rained on Israel, with the vast majority of them intercepted by the Iron Dome air-defense system. Some 12 people have been killed in Israel, including two children, and dozens more injured. Unlike Israel, Gaza does not have air defenses, and the Israeli Air Force has been pounding the Palestinian enclave, targeting what Tel Aviv says are Hamas launch sites, destroying entire blocks and dealing major damage to the infrastructure. Gaza health authorities say at least 227 people have been killed in the strikes, including over 60 children.

The escalation followed days of unrest in Jerusalem and clashes between the Israeli security forces and Palestinian youths. The protests have been triggered by Israel’s plans to forcibly evict several Palestinian families from their homes in an occupied East Jerusalem neighborhood, in favor of Israeli settlers.

Olmert, who served as Israel’s prime minister from 2006 to 2009, believes that the blame for the open armed conflict lays solely with the Hamas militants. He says Israel does not occupy an inch of Gaza, where the armed group is based and argues that the rocket attacks are completely unprovoked, while Israel has responsibility to defend its citizens.

“We’ve pulled out of Gaza. We don’t occupy any part of Gaza. Why do they have to shoot missiles on hundreds of thousands of Israelis on the continuous basis for years and years?” Olmert told RT.

Olmert says that the Hamas attacks leave Israel, which has a superior “military capacity,” with no other choice but to retaliate. He insists that the airstrikes are always carefully calculated. In recent days, Tel Aviv has faced accusations of disproportionate bombings, resulting in heavy civilian casualties and destruction of multiple high-rise buildings and other civilian infrustructure in Gaza. Israeli officials blame Hamas for using civilians as human shields.

Olmert believes that to improve the situation, the international community should first condemn the terrorist tactics employed by Hamas. Secondly, he says the Israeli authorities may want to bypass Hamas and reach out to the common Gazans directly and help improve their life conditions, though he’s unsure if that’s possible any time soon.

Olmert had some advice for the Israel Defense Force, too.

“The attitude has to be to avoid, to the utmost, collateral damage. To refrain from doing things which you know in advance will cause suffering of innocent people,” Olmert said. “This is the priority of our thinking and of our actions, unlike the Hamas, which is shooting on purpose into the center of cities, knowing that there’s no military targets there, just civilians.”

At the same time, Olmert believes that maintaining the occupation regime in the West Bank has been a strategic mistake by the Israeli leadership, particularly on part of the PM Netanyahu who succeeded him in office back in 2009. Throughout the years of his rule, Netanyahu has actively promoted the construction of settlements in the occupied territories and pursued plans to annex more of the Palestinian land.

Olmert said that he remains the proponent of the “two-state” solution for Israel and Palestine, arguing that he was very close to securing de-occupation of the West Bank during his time in office, but that the Palestinian side “missed this opportunity.” Olmert said he believes that Palestinian President Mahmoud Abbas would eagerly accept such a proposal now were a current Israeli PM to make it, “which I’m not certain that he will do.”

“He did not do what an Israeli leader should have done in order to move forward towards peace with the Palestinians. In my mind, the most important strategic threat to the well-being of the State of Israel is the continued occupation of the territories in the West Bank,” Olmert said, adding that withdrawing from the occupied territories would have had a “dramatic benefit” for the country, both domestically and internationally.