Home / WORLD / One year on from the devastating Beirut port blast, no-one’s been held accountable and Lebanon is sliding towards civil war

One year on from the devastating Beirut port blast, no-one’s been held accountable and Lebanon is sliding towards civil war 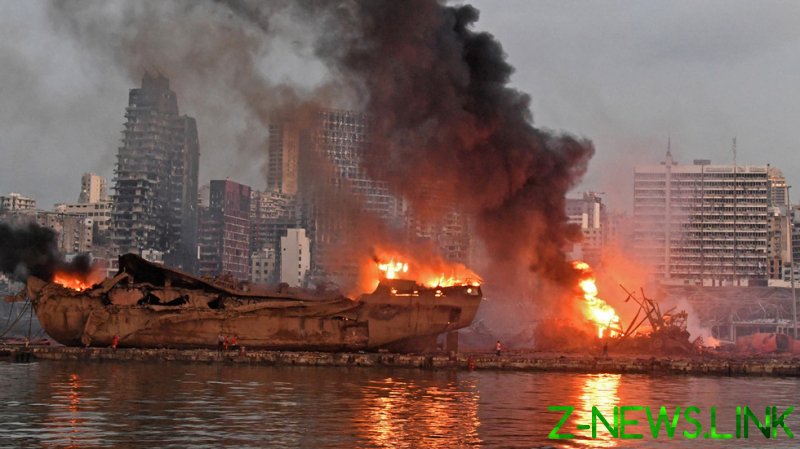 One year ago today, the horrific Beirut Port explosion ravaged Lebanon’s capital, claiming over 217 lives and escalating already boiling tensions in a country embroiled in both political and economic turmoil.

The disaster at Beirut Port was unfortunately not an isolated case in Lebanon, just the most physically appalling, with various other explosions having erupted on the social, political and economic levels alike.

One year on, instead of being able to pick up the pieces and rebuild their nation, the Lebanese have in reality been left to the mercy of the same corrupt internal and external influencers who helped mire their state in debt. As of now, Lebanon has no formal government, 55% of its people live in poverty and officially the country’s currency has lost 90% of its value.

Until now, there has been no real accountability for those responsible for the blast, meaning figures who were aware of the dangers posed by the irresponsible storage of ammonium nitrate, the chemical which is concluded to have caused the blast, have not been punished. The well-known NGO, Human Rights Watch, recently released a report, in which they concluded their researchers had witnessed strong evidence indicating that some officials knew the lethal risks involved and tacitly ignored the problem.

In October, 2019, Lebanese people belonging to all the various communities countrywide took to the streets following the imposition of higher taxes on goods like gasoline and even WhatsApp calls. It was shortly after these demonstrations that the country’s ponzi-scheme economy fell into complete disarray, beyond what anyone could see as revivable without foreign help. The protests eventually pressured then-Prime Minister Saad Harriri to resign from his position and this was combined with calls from the people for a technocratic government.

Following the Beirut Port blast in 2020, demonstrations again escalated, with widespread calls for accountability and reform. Many demonstrators sought to change Lebanon’s confessionalist system, created by the country’s former French occupiers, and which is credited with exacerbating sectarian tensions.

Unfortunately, outside powers sought to influence public opinion in a way which would drive up sectarianism and gear the criticism of the public towards Lebanese Hezbollah. This effort hasn’t yet succeeded in causing a much feared anti-Hezbollah civil war, largely due to the efforts of Hezbollah to stay out of conflict and due to it not belonging to the corrupt Lebanese elite, responsible for bringing the country to its knees.

Although aid relief efforts were made for those most affected by the port explosion, the pledges made by world leaders to rehabilitate Lebanon, most prominent of which was France’s Emanuel Macron, have not yet been realized. This, as the country suffers from an unprecedented fuel crisis, electricity crisis, rapid inflation and the inability to access many of the citizens’ funds from local banks.

The recent killings in Southern Beirut have also caused a scare amongst many Lebanese, that a civil war could at any moment rip through the country. In the town of Khaldeh last Saturday, an alleged revenge-killing was carried out by a member of the village’s Beduin Sunni community against a member of Hezbollah at a wedding. A day later, Sunni Beduins opened fire at the slain Hezbollah member’s funeral, killing three and wounding multiple bystanders. Luckily the situation cooled after Hezbollah released a statement calling on the Lebanese state authorities to solve the issue, instead of acting themselves.

However, in a country so badly plagued by corruption, economic strife, sectarian divides and bordering a country, Syria, under strangling economic sanctions, the prospect of civil war is always a possibility – it has even been suggested by the Secretary General of Hezbollah, Sayyed Hassan Nasrallah, that such an unwanted conflict could happen.

The greatest course of action that needs to be taken at this point, by foreign powers, is to stop their stirring of tensions for political aims and to genuinely help Lebanon. This means putting aside their anti-Hezbollah, anti-Iran propaganda and working to find solutions for the average Lebanese citizen. Above and beyond all, there should be an effort to revive a city which was once called the Paris of the Middle East and was just a few years ago still a popular tourist destination.

The selfish actions of foreign powers, despite the desperate need of aid in the wake of the Beirut Port explosion, have so far caused a further decline in the living standards of the Lebanese people. In order to ever move forward from the blast, the people need to be able to again live dignified and stable lives.