Home / WORLD / ‘One of the worst ideas I have ever seen’: Fans lambast pro wrestling group AEW as they hold hilarious ‘fake MMA fight’ (VIDEO)

‘One of the worst ideas I have ever seen’: Fans lambast pro wrestling group AEW as they hold hilarious ‘fake MMA fight’ (VIDEO) 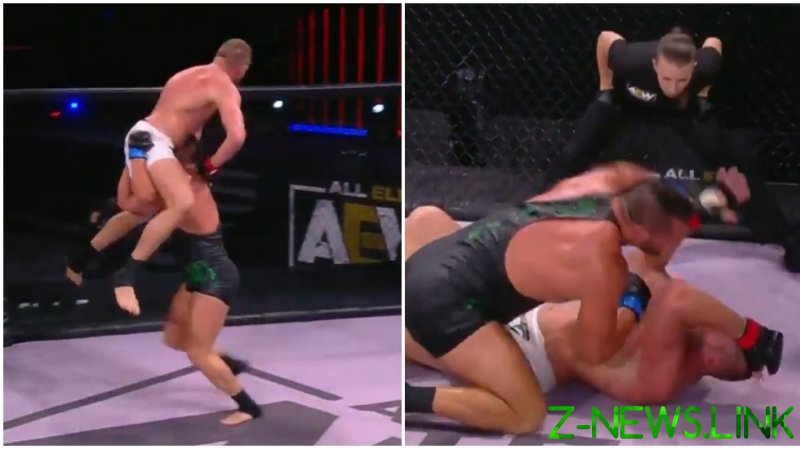 There is little denying that the growth of mixed martial arts has been tethered, albeit lightly, to the popularity of professional wrestling in the late 90’s and beyond, with Dana White admitting that he borrowed some promotional razzmatazz from Vince McMahon’s decades-old box of tricks in the UFC’s halcyon days.

Lately though, the stream is flowing in the other direction. Pro wrestling’s popularity has dipped as the UFC and others siphoned off sections of its fanbase, and it became inevitable that wrestling would dip its toes into MMA before long.

Brock Lesnar’s return to the WWE from the UFC saw him essentially promoted as a mixed martial arts fighter when the reality was anything but. See too Ronda Rousey’s drafting into the realm of sports entertainment where by all accounts she became a bona fide star in her new career offshoot.

But even among those successes, McMahon’s wrestling empire stopped short of holding events explicitly promoted as being mixed martial arts contests.

AEW, the latest challengers to WWE’s stranglehold on the wrestling industry, promoted a ‘fight’ between Jake Hager and another wrestler, Wardlow, at a recent show – and this unhappy marriage between entertainment and athletic competition wasn’t met well by many.

“I’ve seen better fights at White Castle at four in the morning,” came the reaction from one unimpressed wrestling fan.

“When I said I wanted to see Jake Hager in a cage I was talking about a jail cell. This sucks,” said another.

“I love wrestling, but this one of the worst ideas have ever seen,” was the summation of another.

Jake Hager, one half of AEW’s so-called MMA bout, does have a background in mixed martial arts and has rendered three wins and one no-contest in four fights under the Bellator banner, with his most recent coming last October when he outpointed Brandon Calton across three rounds.

But the next time he steps into the Bellator cage he will be facing a far sterner test than he did against Wardlow, whom he ‘defeated’ by arm-triangle choke in the scripted fight.

Just don’t expect that to show up on his professional record anytime soon.