On the streets of Kiev “lit up” favorite car of Hitler 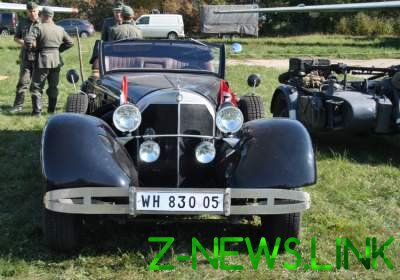 Rare car became the main “pearl” of the festival.

Star of festival Old Car Land, passing in these days in Kiev, has become a rare convertible Mercedes-Benz 770, 1943. It is luxurious and expensive pre-war model of the German mark.

Just released only two hundred Mercedes-Benz 770. It is known that this model is a favorite car of Adolf Hitler, such car enjoyed the Spanish dictator Francisco Franco and Emperor Hirohito of Japan.

Original Mercedes 770 was equipped with a 7.7-liter row eight on 180 HP with a mechanical compressor. But this car the engine and transmission from GAZ-21 Volga.

The fact that the original powerplant did not survive. Generally car found in the form of piles of scrap metal in one of the villages in the Rivne and I had to restore the luxury convertible Mercedes 770.