“On the rifle for Sobchak”: Network laugh Crimean beggar 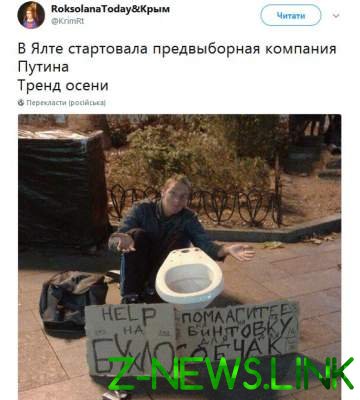 Now he asks for a drink.

The network has shown, who in the Crimea campaigning for President against Vladimir Putin and the newly minted candidate Ksenia Sobchak.

The picture appeared on Twitter account RoksolanaToday&the Crimea. In the photo the man sitting next to the toilet, asking money “on booze” and “on the rifle for Sobchak”. “In Yalta started the election campaign of Putin. The trend of autumn”, – the blogger writes.

As we wrote earlier, Ukrainians cheered the list “hotelok” for the protesters at the Parliament. It turns out that they do not have enough underpants, and hats.