Home / Video news / On one of the largest markets of the city was on fire. Video

On one of the largest markets of the city was on fire. Video 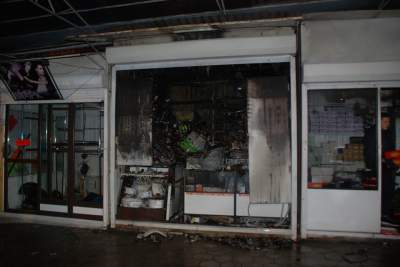 The fire was extinguished by more than 30 rescuers and six units of special equipment.

Lviv rescuers on Sunday evening, November 12, nearly two hours extinguished the fire on one of the largest industrial markets of the city. This was reported in the press service of the State service of Ukraine on emergency situations in the Lviv region.

“On November 12 at 19:02 received a report of a fire at the market “Galician perehrestya” on the street Polesskaya in Lviv. At the time of arrival of rescuers, the fire covered a school catering (“Cheburechnaya”) and spread to three adjacent pavilion. Because of the dense smoke rescuers had to work in devices of protection of respiratory organs”, – stated in the message.

The fire was extinguished at about 20:30, no injuries. The fire destroyed the institution of public power, a few trade stands (selling clothes, shoes and electrical goods) with a total area of 200 square meters, damaged two trade pavilions the area of 40 sq. m.

At the same time saved from the fire 15 pavilions.

The fire was extinguished by more than 30 rescuers and six units of special equipment.

The cause of fire and amount of damage are established.