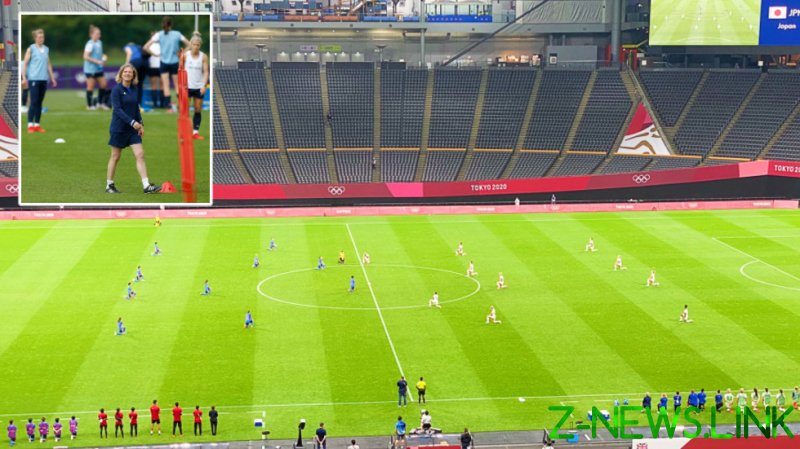 Several members of the squad had spoken out about the importance of making the gesture before games in Tokyo, and the Japan players showed their approval by joining in and kneeling shortly before kick-off, while Arsenal forward Nikita Parris reportedly held up a fist.

The gesture has continued to be a controversial feature of high-profile football matches this summer, with a political row breaking out in England after the men’s senior team vowed to continue taking a knee despite boos being heard when they performed it at games ahead of their Euro 2020 campaign.

Critics of the symbolism, which its supporters say opposes racism, claim it is divisive, lacking meaning and a validation of what they believe are the dubious motives of the Black Lives Matter campaign.

“Was looking forward to watching the women’s football match between GB and Japan,” responded one unimpressed watcher, looking on as the game began in front of a global TV audience on Saturday.

“As soon as they got on their knees, I turned it off. My loss, but I will do this every time.”

One viewer suggested that UK Home Secretary Priti Patel, who questioned the taking of the knee before Euro 2020, and prime minister Boris Johnson would be “fuming” at the development.

Patel was publicly rebuked by England and Premier League defender Tyrone Mings earlier this month, accusing her of “stoking the fire” of racist abuse by failing to endorse kneeling.

The match referee also took the knee. “Parents: if you want good role models for your girls – and boys, actually – stick them in front of [this game],” applauded one fan.

Opponents Chile also took the knee in Team GB’s opening match of the Olympics, when Manchester City striker Ellen White scored both goals in a 2-0 win.

The women’s side were the first team to represent Team GB at the Games, and captain Steph Houghton reiterated her support for the decision after their victory.

“Taking the knee was something we spoke about as a group,” she explained. “We feel so strongly and we want to show we’re united.

“We want to fight all forms of discrimination and, as a group of women, we wanted to kneel against it.”