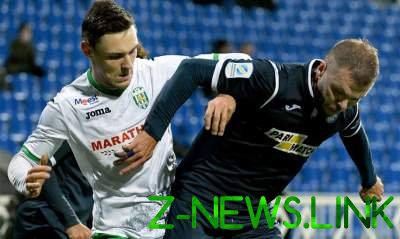 FC Olimpik Donetsk in the 26th round of the Premier League has issued a strong-willed victory over Karpaty.

“Olimpik” already in the ninth minute took the lead – Mr. Pasic was on the shock position in the penalty area and coolly put the ball into the far bottom corner.

The minimum advantage of owners maintained until the 36th minute-Snurnitsyn grossly mistaken near his own penalty, the ball was picked up by the Ongal and gave a perfect pass to Di Franco, who could place the ball into an empty net.

The second half began with a successful attack from the “Carpathians”. Gutsulyak great pass in the penalty area found Ponda, and the touch sent the ball into the net.
It seemed that Karpaty will take the three points and strengthen their position in the standings, but the visitors managed to not only lose a victory, but to leave with a draw.
Eugene Pasic in two minutes gave two assists, and Degtyarev, and Matar brought the “Olympic” strong-willed victory.

Spectacular comeback in the match against Karpaty allowed Marseille to press the “white-green” with saving the ninth position. Since the departure of Vyacheslav Shevchuk from the post of the head coach of Olimpik, Shakhtar Donetsk scored 6 points in two games and greatly increased their chances of staying up in the Premier League.

In 27-m round “Olimpik” will Vorskla and Karpaty in the match will play against Kiev “Arsenal”.