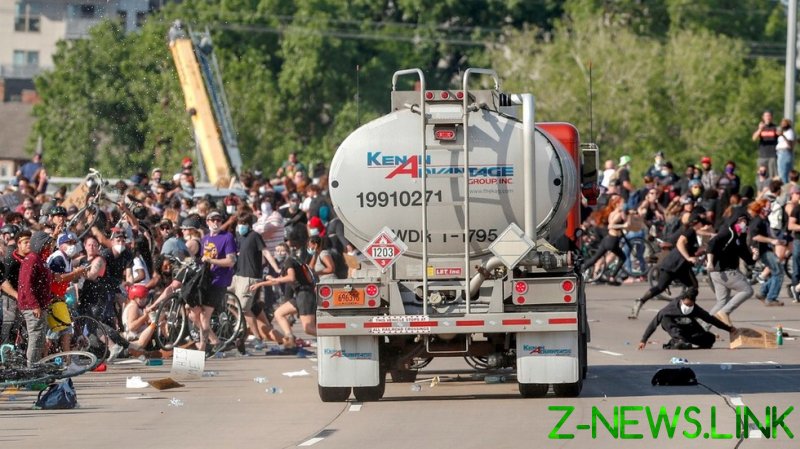 Stitt signed the bill, which also stiffens penalties for protesters who block public roadways, on Wednesday. But the most controversial provision was one that gives motorists immunity from prosecution for unintentionally striking and killing or injuring rioters who block roads and threaten them.

“We are sending a message today in Oklahoma that rioters who threaten law-abiding citizens will not be tolerated,” Stitt said. “I remain unequivocally committed to protecting every Oklahoman’s First Amendment right to peacefully protest, as well as their right to feel safe in their community.”

Critics suggested that the law will give drivers a green light to run over peaceful protesters and claim they were in danger. For instance, such a law might have provided legal cover when James Fields drove his car into a crowd of counter-protesters at the 2017 Unite the Rally in Charlottesville, Virginia, killing Heather Heyer.

However, Fields sped down the street toward the crowd, meaning he wasn’t blocked and wasn’t fleeing. Fields was convicted of federal hate crimes and was sentenced to life in prison.

“So essentially he’s outlawing any peaceful protests because I’m pretty sure some of his buddies are revving their engines,” one Twitter user said of Stitt.

Other observers said the law will have unintended consequences, as pro-life demonstrators and other conservatives could be targeted during their own protests. Still others took it as a reason to attack the state. “Who the hell would even want to drive through this ridiculous, backward state?” one commenter asked. “Let them eat each other.”

Signing of the Oklahoma law comes amid a spate of anti-riot bills in Republican-controlled states, such as Iowa and Arizona, that were introduced in response to a wave of violent protests across the US following the death of George Floyd in Minneapolis police custody last May.

Tennessee and Florida lawmakers considered legislation with protections for drivers similar to those enacted in Oklahoma, but the bill signed into law on Monday by Florida Governor Ron DeSantis stopped short of giving motorists immunity from prosecution in such cases.

The Florida law did make it a felony for protesters to block a highway, and it gave drivers who are stopped and threatened some protection from civil lawsuits. The bill also protects monuments and requires cities to get state approval before cutting police budgets.

A bill in Indiana would prohibit anyone who is convicted of unlawful assembly from getting a government job. Minnesota’s GOP-led Senate has a bill that calls for those convicted of rioting being barred from getting state-backed financial aid, including unemployment benefits and student loans.

“It seems like red states are trying to out-crazy each other,” one observer tweeted. “No one is listening to people. Everyone needs to vote out the bad apples, red or blue.”

But others pointed out that the Oklahoma law addresses a legitimate concern – people being attacked in their cars by mobs of rioters blocking roads. Black Lives Matter protesters last May blocked Interstate 244 near Tulsa, Oklahoma, and surrounded a truck pulling a trailer.

They pounded on the truck and reportedly threatened the man, his wife and two children inside. The woman and children cried on the floor of the truck as it was struck with fists and projectiles. Several protesters were injured as the husband drove through the crowd. Local prosecutors decided not to file charges against him.

During the 1992 Rodney King riot in Los Angeles that marked the most damaging US civil unrest of the 20th century, protesters pulled motorists from their cars and beat them. In one of the most infamous incidents, four men pulled truck driver Reginald Denny from his vehicle in south-central Los Angeles and beat him nearly to death in the middle of the street. One of the men threw a cinder block at Denny’s head. More than 60 people were killed during the LA riot.

“This law makes sense,” one observer said. “If protesters leave people in cars alone, there’s no risk to them.”