Home / economy / Oil is preparing to repeat the meltdown of 2015

Oil is preparing to repeat the meltdown of 2015 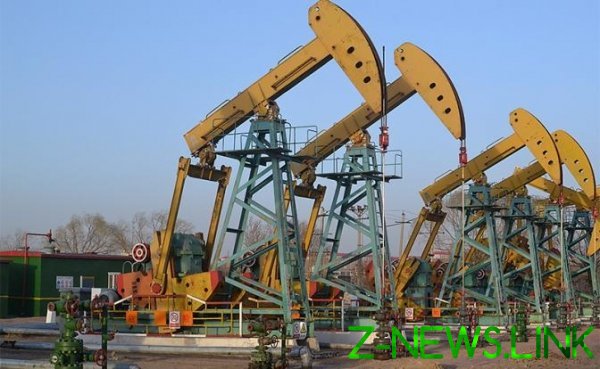 The price of oil on 31 may for the first time since February 2019 fell below 64 dollars per barrel. The decline began a day earlier, when just a few hours the price has fallen from $ 70 to 64.5. By Friday, prices fell below 64, in total losing more than 7% per day. WTI fell below $ 55 per barrel.

Decrease in quotations began on the morning of 30 may and intensified after data on stocks of oil and oil products in the United States. Gasoline inventories increased by 2.2 million barrels, while forecasts expected a decline of 800 thousand barrels.

“Free press” already wrote about the fact that oil prices threatens the collapse and it seems that analysts began to come true. Data on business activity in China testify to its slowing down and the PMI fell below the key mark of 50 points, indicating a negative impact of trade wars on the global economy.

According to analysts, bad news and negative sentiment overall, finally, raised the markets, and awareness of future challenges has led to a sharp decline in oil prices.

On Friday, a fall fueled news about the next duties of the United States, however, this time in China, and Mexico. President Donald trump has announced that it will impose duties on all Mexican goods in the amount of 5% because of the violation of the migration regime. This increased market concerns on the slowdown in the global economy and, consequently, falling demand for energy.

Trade contradictions of the U.S. China, however, also did not disappear and continue to plague the market. It is not surprising that the price of oil collapsed. Surprisingly, rather that they should kept at the level of 70 dollars per barrel.

However, to support the price of oil escalating conflict between the US and Iran. The us embargo on oil supplies from the Islamic Republic in may, came into force in full. The US special envoy on Iran Brian hook said that Washington will give the countries-importers of Iranian oil exceptions to the existing package of sanctions. Significant volumes will disappear from the market. However, they are still compensated by the other country. Including the United States itself.

The ruble also reacted to the news, although the Russian government and declare that our currency is already completely detached from oil prices. However, the “wood” on Friday fell by 22 kopecks against the dollar to 65.39. The Euro altogether rose by 36 cents to 72.91. And the lower will fall the price of oil, the weaker will be the ruble, despite a fiscal rule under which all oil revenues in excess of $ 40 per barrel are not in the budget, and the national welfare Fund.

To what extent can the fall in oil prices? It will depend on whether Washington to negotiate with Beijing or not.

— Now the price of oil is determined by two points, — explains the analyst of group of companies “Finam” Sergey Drozdov. — The first and most important trade dispute between Washington and Beijing. If he will continue to drag on, it will continue to affect prices.

Oil has long been considered a speculative asset and a financial instrument and not just commodities. On fundamental things quotes react only when in the markets there is peace and stability. During strong downturns, the oil reacts to negativity in the first place, and with double force.

Futures contracts for oil are traded with a large beta (beta coefficient reflects the sensitivity of stock to the market — approx. ed.). Generally speaking, if the American stock index S&P 500 falls to 1-1,5%, oil prices could fall to 3-4%. Now we see classic risk-off (buying bonds of high reliability and sell commodity currencies and assets — approx. ed.) by broad asset class, including oil.

The second point — local. Yesterday, the statistics on oil reserves in the United States, and it was worse than the consensus forecast.

But, as I said, when there are global things like trade disputes or expectations of slowing global economy, oil is very sensitive reacts to them.

“SP”: — But the conflict broke out today. Why oil began to fall right now?

— Oil also started to fall not today. Just before that the decline was not as dramatic. The price of “black gold” we have correlated with the dynamics of the American market S&P 500, but with a slight delay. So now they play this “lag”.

You can draw analogies with December last year, when the S&P 500 began to enter into a steep dive. And oil prices also began to fall at 3-5% in a day.

“SP”: — What is the prognosis can be given in the coming weeks, oil prices continue to fall?

— Everything will depend on how to enhance the fall of the American stock exchange. If they continue to decrease — oil will go over them. It should be viewed as a financial instrument with all the consequences.

“SP”: — How the decline in oil prices will affect the exchange rate?

— The ruble fell, but he was already overly weakened. Despite the fact that monetary authorities claim they have no control over the exchange rate and it is subject to market trends, in fact, when oil rose to $ 75 in April and may, the ruble could not even pass towards the dollar mark in 63-65.

Last year was a similar situation: when oil tested the level of $ 86 per barrel. Strong strengthening of rouble we have not seen.

From the latest news the US authorities have stated that they can include in the list of currency manipulators and Russia. And they are not so wrong. Now the exchange rate is a kind of shield from the problems of the economy. The monetary authorities benefit from a weak ruble, and it is unlikely we will see the rate of 50 per dollar. Last year, Siluanov and … explicitly stated that the ruble at 50 we do not need.

Is also bend, which should be avoided. But if we see the global crisis like the one that was in 2008, the dollar may be 75, and 80. While it is too early to monitor the situation on the market. I repeat that if the American stock exchange will increase the drop of oil will go after them.

See also:  In Ukraine continues to rapidly rise in price of diesel fuel

As stated by our departments, the ruble rid of oil. But it happened very peculiar. When oil is rising, the ruble strengthened very slightly. But when prices fall, it is attenuated much faster. Now should talk about the level of 66-67 per dollar.

“SP”: — But after 40 dollars a barrel the income from the sale of oil will still go to SWF. A drop to this level will affect the ruble?

— The fall in oil prices for the ruble will still be unpleasant. Yes and the national welfare Fund will no longer be filled.

If fantasize and assume that the prices will fall by 30-40 dollars, we are likely to see a course in 70-72 RUB with regard to fiscal rules, it leads to the fact that Russia’s population actually lives at the rate of $ 40 per barrel. And the exchange rate of the ruble against the dollar is a kind of tax for the population on all these troubles.

Theoretically, if oil prices fall to $ 40 per barrel a few years ago, shale production in the United States begins to collapse, as the cost of production of this type of “black gold” is much higher than traditional. Hence, market supply will decrease and the rates will go up again.

However, as told by the Professor of financial markets and financial engineering Sergey hestanov, now the cost of extraction of oil shale decreased significantly, so at current prices and even under $ 50. per barrel U.S. producers will feel comfortable.

— Kancevica manages systematically to reduce costs. Now a reasonable assessment of the cost of production of shale oil — $ 36 a barrel.

It is worth considering that this assessment from the British Petroleum is periodically reviewed. Plus kancevica, unlike conventional oil producers, all highly dependent on geological conditions. In one district the price may be one, but outside — is quite different. Therefore, these estimates should be interpreted with caution. But in any case, even $ 36 is radically lower than the current prices on the market.

The market is now more or less balanced. But he is very nervous due to fears of a trade war between China and the United States. Just recently was made by another portion of the hard statements from trump, which imposed duties not only against Chinese, but also against Mexican goods.

Everyone’s treated as factors that can cause recession, and it forces dealers to actively sell the oil and reduces the demand for it. Now we see more psychological reaction of the market.

What’s next — depends on developments. If the conflict will not end with a truce or, even more similar claims will get the EU, it could trigger at least the global recession. And as a maximum — a global crisis. And then the fall will seem childish prattle.