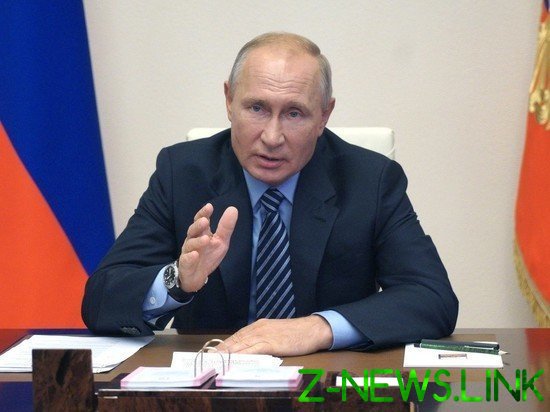 Officials brought Putin from himself

Mr Putin said that we should not “look like fools”, protecting their interests, Vladimir Zhirinovsky found in the country of neo-Stalinism and revealed conditional state secret (but zatejali not him, but the journalist Safronova), Kudrin believes that we have stagnation, and Mishustin, that “the achievements of decades of struggle against poverty” threatens the coronavirus. What all these revelations? Yes, that was worth it to cement the polity amendments to the Constitution, as our house began to rattle the roof.

Not in the sense that our gods gone mad, and, one might say, in a practical sense. Having received the constitutional guarantee of the inviolability of his power for the next fifteen years, they began to get comfortable.

Especially active officials ticked off even Putin. Don’t think he said that in protecting its interests, we should look “like fools, like crazy, which got into the hands of the razor, and they run, she waving”. It is easy to guess that this is all the echoes of the fight with a rainbow, though about foreign policy it was said. The same will only give, they are quite Patriarchal “Hey, Slavs!” to the promotion of equate. Right the race is on, who’s screeny.

The deputies in her confidently entered. Look in the Constitution in addition to a spoon of tar has made a lot of really good amendments that required legislative implementation. On good terms with them to begin. For example, amendments on the minimum wage, which must not be below the subsistence level. Or the indexation of pensions. But… It will require money to give people. But it is unpleasant somehow, and not accepted. So the first thing the state Duma decided to adopt a law on fines for incitement to exclusion areas. A great option — and on-state, and not expensive.

Now with the cost of do not just need to save achievements in the fight against poverty. Mishustin said: “Under threat were developed during the last decade achievements in the field of poverty reduction and employment of our population.” Powerful were the achievements. Was called — “but not the nineties.” Was supported by the right statistics. But then came the coronavirus and devoured them, as Colorado beetle of potatoes. That could not happen, because the progress is not equitable distribution of wealth of the country, and the appropriation of the results of the labor of others by those who own the means of production.

Here they are, those who are captured at the time the means of production, now generally there is nothing to fear — the system will not change, you can continue in the same spirit. Well, some things will change, but really, the little things. That Putin, for example, in the week instructed to adopt a law to avoid accidents, like Norilsk. Well, I’m not a MP I would head broke, and how to write something? Dear capitalists, litter nature forbidden? It is necessary to repair old Soviet hardware? Laws have enough. Just spit on them like those people who have in the first place profit. When I served in the border troops, we have the most disgusting outfit was the outfit in a cargo port on the protection of ships carrying meal (concentrated feed from the meal). While it loaded it’s so dusty flies that a person centimeter layer of dirt covered. It’s been 30 years since then. In the port at the other end of the country in Vanino, the Prosecutor’s office finally ordered the owner of the port of the MPC, measurements of coal dust in the air. And when the coal too much for her. It was literally obvious, without any measurements. But caring about people and nature — wasting. Our system by default does not provide. Well, so why develop something if not all squeezed out of what is?

Here the head of audit chamber Kudrin said this week, his lecture to the graduates of the Russian economic school: “Despite the fact that we have been talking about this for many years, unfortunately, political decisions are not taken. Unfortunately, we’re not. We are in stagnation.”

The other part of the roof began to move too actively. Can’t wait to show them who’s in charge now. Arrested journalist Safronov — but he likely was a victim of domestic graters of the security forces, one of the all-powerful service control with another control (in a rubber article of treason in almost any international journalist, a scientist working with aliens, or a military expert, visiting international exhibitions, close). But the arrest of the Governor Furgala is a direct signal. If you play by the rules — could be anyone, even a murderer in the past. But as soon as you start to play in democracy, to show that the authorities do not need to have yachts, the Governor does not have to be astronomical salary, the officials must fly economy class, not business class — Hello, all the skeletons out of the closets will polytrichia. Zhirinovsky for his Furgala so offended that he became the Kremlin is to blame — they say that Moscow officials demanded from the Governor of Khabarovsk territory Sergey Furgala to carry to the capital of the box with the money, but he did not. So, the press Secretary of the President had to threaten: “These words must be backed by evidence. Otherwise, those who mentioned, unable to stand up for herself within the existing law…”. However, Zhirinovsky is difficult to stop. Though he saw the neo-Stalinism in the arrest Furgala still said no Asgardia people will not stop. And it was right.

In Khabarovsk people came out for the Furgala. Yes, it turned out that the government threw all the power of the propaganda machine to explain that it is not the people’s anger, and all manufactured and purchased, solid criminals and provocateurs. But no Regarde with these thousands of people who have elected them, and not appointed from above of the Governor, to do anything was gone. For the first time after an unauthorized March of this magnitude cost without detention. Traffic police and even the main street was released, and accompanied the column of people. Whether there on the spot, I realized that the military solution would be worse, whether it was in solidarity with the people. Exactly clear just what the local authority then the RAM’s horn twist — you can’t allow people to demand something with no higher acceptance.

Yes, and one never knows the people about the 31st article of the Constitution will remember the one about “freedom of Assembly”. And someone up high, these problems need? There, in the attic, such a fuss is that the tiles on top of poured — just manages to Dodge.