Home / WORLD / Off to live on a cyberfarm? NYPD retires robot cop dog after public outcry over ‘creepy’ & ‘dystopian’ tech

Off to live on a cyberfarm? NYPD retires robot cop dog after public outcry over ‘creepy’ & ‘dystopian’ tech 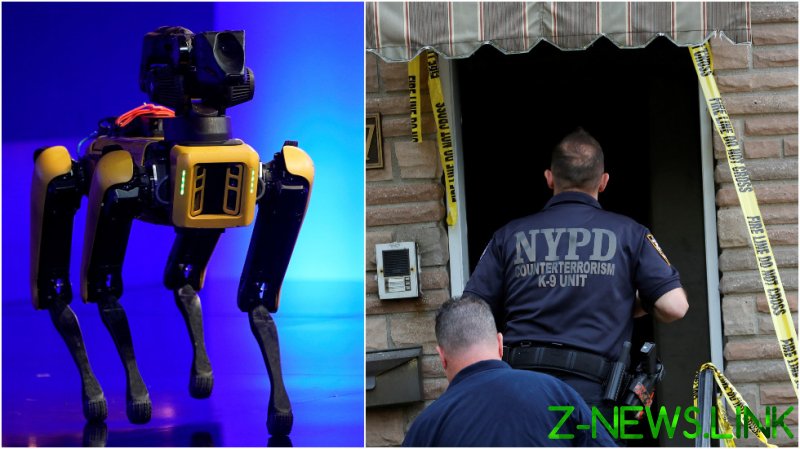 Deputy police commissioner for intelligence and counterterrorism John Miller told the New York Times on Wednesday that the robot, named “Digidog” by the department, would no longer be used, saying a contract with its creator was cancelled after the canine became a “target” for public criticism.

“People had figured out the catchphrases and the language to somehow make this evil,” Miller said, calling the bot “a casualty of politics, bad information and cheap sound bytes.”

We should have named it ‘Lassie.’

The NYPD’s lease for the device was meant to end in August, and the department had intended to continue testing its capabilities until then, but decided to end the trial early, Miller added.

While the department boasted that the $75,000 Digidog would “save lives” and keep officers out of harm’s way after renting it from Boston Dynamics last year, many New Yorkers found the robot off-putting, conjuring images of faceless, automated policing and, for some, scenes from dystopian fiction like ‘Robocop’ and ‘Black Mirror.’ The device has been deployed several times, including earlier this month, when it helped to apprehend an armed man in a Manhattan housing project, though police insisted it did not play an “active role” in the arrest.

The dog was also unleashed during a suspected hostage situation in late February, with officers sending it into a home where armed men were believed to have taken a man captive. While they ultimately found the house empty, the robot’s use stoked privacy concerns for some, including Democratic New York Rep. Alexandria Ocasio-Cortez, who likened the Digidog to a “robotic surveillance ground drone.”

Another New York congressman, Ritchie Torres (D), called for the “federal government to step in” after the Digidog’s most recent use this month, announcing legislation that would force police departments to report the use of surveillance tech if they receive federal funds.

Local lawmakers have also voiced skepticism, with Councilman Ben Kallos introducing the ‘No Killer Robots Act’ in March, which aims to increase transparency on law enforcement’s use of such technology. While the robot is “not currently equipped with weapons,” Kallos’ office said there is no explicit policy preventing that from happening.

Developers at Boston Dynamics, however, insist the bot is meant only for non-violent purposes, with a spokeswoman saying on Wednesday that they are “not designed to be used as weapons, inflict harm or intimidate people or animals.”

But the ‘intimidation’ factor may have ultimately spelled the dog’s demise, as even a representative for New York Mayor Bill de Blasio said he was “glad the Digidog was put down.”