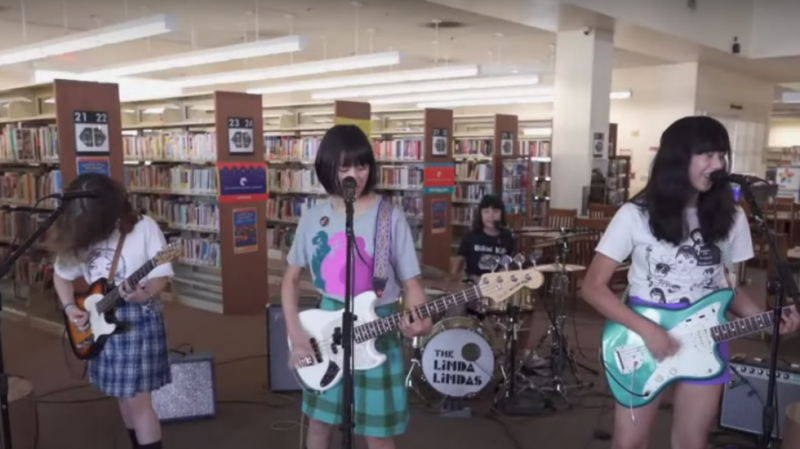 The Linda Lindas, a Los Angeles band of girls ranging in ages from 10 to 16, are winning adoring fans among dedicated liberals over a performance of their song ‘Racist, Sexist Boy’ in celebration of AAPI Heritage Month, which has gone viral on social media.

“A little while before we went into lockdown, a boy came up to me in my class and said that his dad told him to stay away from Chinese people,” the drummer for the band says, introducing the song during a set at the Los Angeles Public Library this past week. “After I told him that I was Chinese, he backed away from me. Eloise and I wrote this song based on that experience.”

What follows is what one typically hears from a teenage band. Young craftspeople make a lot of noise and show their rocker attitudes as they begin their artistic journeys.

This is different, though, because of subject and lyrics pulled straight from the woke playbook (“you close your mind to things you don’t like”) and, because politics apparently trumps art even in young artistic output, the song has won massive praise on social media, with some even referring to it as a “new religion.”

“I have a new religion and it’s this,” Vanity Fair’s Joanna Robinson tweeted.

Mind you, the praise is mainly for a clip of this one song (rather than their much longer performance). The adulation is about the politics behind the music and the fact that it’s coming from teenage girls, more than anything related to encouraging young artists.

Before going any further, it must be noted that there’s nothing wrong with the Linda Lindas or their ‘Racist, Sexist Boy’ punk song. No young artist should be told not to rock on, so these girls should just keep on rocking in the free world.

As usual, it’s the 24/7 digital activists that know just how to ruin something. The overpraise for the song simply because it fits with the trending ‘everything is racist and racism sucks’ vibe of the moment is just lame virtue-signaling on the culturally safe backs of teenagers.

This is the sad standard that is being promoted for art today. Say the right thing and have the right message, and you’re a great artist. Just look at Hollywood award shows, which have been crashing and burning in the ratings for years now, as woke activists selectively promote and praise little-seen efforts that tick the right social boxes, regardless of quality or relevance.

This is now not only the standard for mainstream output in the entertainment industry, but also one being promoted to young artists. Master your craft and find unique ways to say something in your voice or just scream about the right things and you can be praised like the next Nirvana. Make your choice.

Like so many social media posts of support for whatever cause happens to be trending that day, the praise for this trending video is more about the people applauding the thing than the thing itself. It presents a chance to virtue signal and validate your ticket to the left tribe. That’s what art is slowly becoming. An opportunity to attach yourself to some larger movement or validate your partisan beliefs.

If you hit on racism, sexism, and boys before you even drop a note then forget about it. You’re the next ‘it’ thing … until some new trendy words grab everyone’s attention and they seek out new art to validate their righteousness in that cultural moment.

It may be a trend taking over Hollywood and other entertainment industries, but we shouldn’t let the lameness of modern art stop us from promoting something more punk to future generations of artists than ticking the right activist boxes.