Oculus VR has unveiled a headset for virtual reality helmet 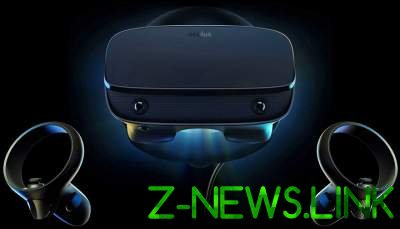 Company Oculus VR, purchased five years ago by the giant Facebook, has recently been presented the successor to the virtual reality helmet Rift. The device is called Rift’s and favorably known VR headset raised resolution screen, and a new system of tracking that does not require external sensors or cameras.

Instead of two OLED-matrix with a resolution of 1080 x 1200 pixels, typical for Rift, the new Oculus Rift’s uses a single 5.5-inch LCD display with a resolution of 2560 x 1440 pixels (or 1280 x 1440 for each eye). The refresh rate has dropped from 90 to 80 Hz. However, due to the transition to the liquid crystalline matrix managed to get rid of the so-called “screen door effect”, when the space between individual pixels becomes visible in the image.

The new system of tracking Oculus Insight, also used in standalone headset Quest. It relies on five cameras mounted on the Rift’s housing, provides the manipulators Touch and allows the wearer of the headset to navigate the space without having to remove the helmet.

In the work on Rift’s participated Lenovo, which is also responsible for the production of a new headset. Among the other features of the device can be recycled note head-mounted mount and integrated speakers. To connect to a computer using a DisplayPort 1.2 and USB 3.0. Perhaps in the future there will be support VirtualLink.

On sale VR headset Oculus Rift S will be available this spring for a suggested price of $ 399.