Home / WORLD / #OccupyCongress trends on Twitter, so why are there no headlines on insurrection?

#OccupyCongress trends on Twitter, so why are there no headlines on insurrection? 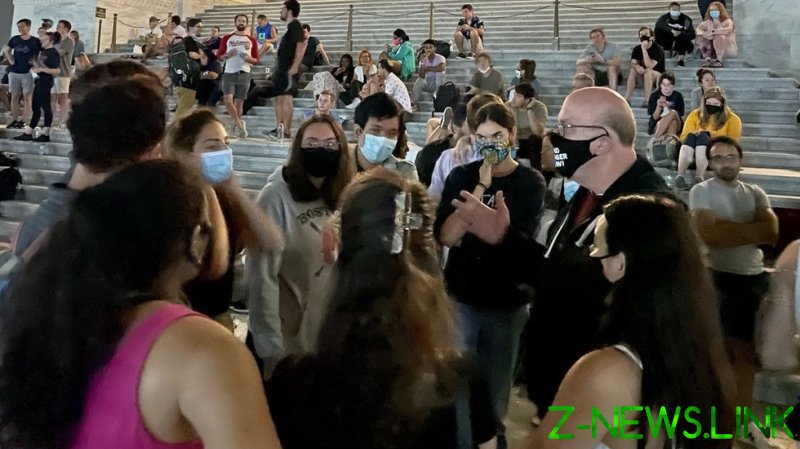 Hashtag #OccupyCongress briefly shot to the top ten of Twitter’s US trends on Sunday, with dozens of progressive commentators demanding the House come back from its 6-week recess and reinstate a federal ban on evictions, which expired on Saturday.

“It’s fitting that #OccupyCongress is trending. Not only should there be no end to the eviction moratorium while Congress vacations and a pandemic rages again but we need to keep organizing a widescale housing justice movement to fight nationwide,” Democratic Socialists of America tweeted.

The hashtag was also launched in support of the action by several Democratic lawmakers, including Alexandria Ocasio-Cortez and Cori Bush, who spent the night on the steps of the Capitol, with AOC decrying her own party and the Biden administration for dragging their feet on the issue.

Some commentators, however, began drawing parallels between the campaign, driven by the progressive left and the Capitol riot.

“Let me get this straight. The same people who called January 6 an insurrection and a rebellion now want to #OccupyCongress to extort them into meeting their demands?” one commenter tweeted.

The January 6 events saw hundreds of supporters of former President Donald Trump flocking to and then storming the Capitol in a bid to stop the certification of the presidential election results because they believed they were fraudulent.

While #OccupyCongress was trending heavily at one point, the hashtag conspicuously disappeared from the trends shortly after. Some activists went as far as to suspect a Twitter crackdown. “Twitter is suppressing and silencing poor working class people asking for their rights,” one commentator concluded.

The eviction moratorium was issued by the Centers of Disease Control (CDC) to prevent tenants who were behind on their rent due to the Covid-19 pandemic from imminent eviction and was repeatedly extended. However, after the CDC extended the moratorium for the month of July, it stated that this would be the final extension, leaving it up to the Congress to figure out how to protect some 3.6 million Americans at risk of losing roof over their heads.

Even though the Democratic Party controls the House, the last-minute effort to round up enough votes to approve the bill failed on Friday reportedly after about a dozen of House Democrats refused to support it. House Speaker Nancy Pelosi squarely blamed the Republicans for “blocking” the measure all while admitting on Friday that she learned of the need to pass the bill “only yesterday.”

That is despite US Supreme Court Justice Brett Kavanaugh signalling in a June ruling that the moratorium could not be extended any further and that the time left should be used for “additional and more orderly distribution of the congressionally appropriated rental assistance funds.”