Home / WORLD / Obama demands urgency on climate, but says nothing about carbon footprint of bombing campaigns

Obama demands urgency on climate, but says nothing about carbon footprint of bombing campaigns 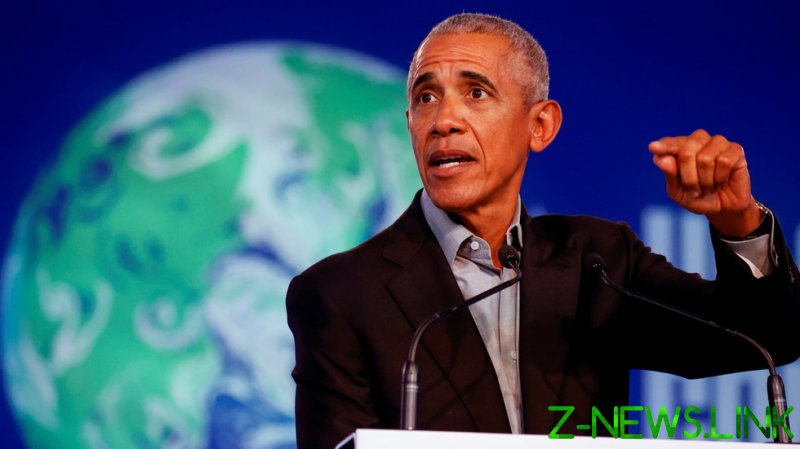 “Some of our progress stalled when my successor decided to unilaterally pull out of the Paris agreement in his first year in office,” Obama said on Monday at the UN climate summit in Glasgow, Scotland. “I wasn’t real happy about that.” He went on to accuse former President Donald Trump of “active hostility” against climate science and said America lacked leadership during his successor’s four-year term.

Twitter users suggested otherwise, noting that Obama’s own record on climate change was stained by military interventions around the globe, among other alleged sins against humanity and the environment. “Progress wasn’t stalled by Trump,” one commenter said. “It was stalled when the Obama administration dropped 26,171 bombs in his final year in the White House… How good was that for the climate?”

The US military is the world’s largest institutional emitter of greenhouse gases, according to a 2019 study by Brown University. In fact, if the Pentagon were a nation, its emissions would exceed those of about 140 countries, including Sweden, Denmark and Portugal. From 2001 through 2018, America’s wars and military interventions generated an estimated 1.27 billion metric tons of greenhouse gases.

Other observers pointed out that like many other leaders, Obama has made alarmist statements about climate change while failing to make lifestyle choices that align with his rhetoric. For instance, despite warning that rising sea levels threaten to “swallow up entire communities,” he bought an $11.75 million waterfront mansion on Martha’s Vineyard in 2019. And like many other COP26 dignitaries, the former president flies by private jet and parties on private yachts.

However, Obama’s criticism wasn’t limited to Trump. He also chided Russian President Vladimir Putin and Chinese President Xi Jinping for failing to participate in COP26. He accused Russia and China of displaying a “dangerous lack of urgency” on climate issues. That’s despite the fact that most of the world leaders agree that global COVID-19 pandemic is still ongoing and that mass gatherings should be avoided if possible.

While Biden and US climate envoy John Kerry hoped to boost America’s image on climate-change issues by taking the unusual step of enlisting a former president to speak at such an event, it’s not clear how much political influence Obama still wields. He campaigned unsuccessfully for Virginia gubernatorial candidate Terry McAuliffe, who was defeated last week, just as his effort to help defeat the Brexit movement in the UK backfired in 2016. That same year, Obama said Trump had no chance of becoming president.