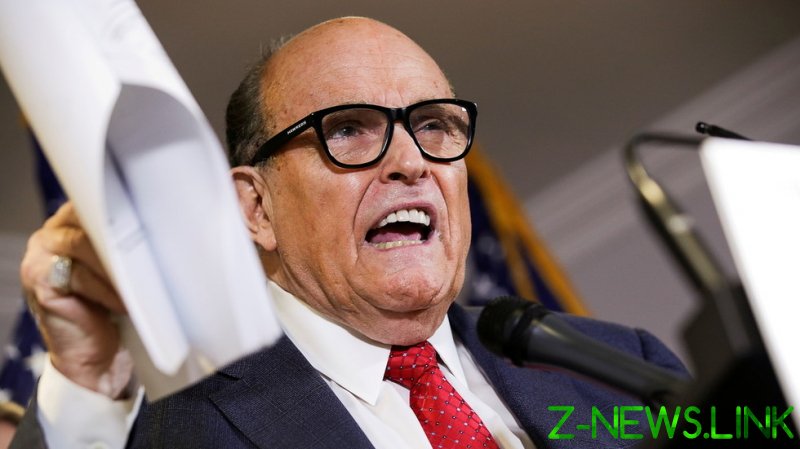 The New York Times, NBC, and the Washington Post all ran stories claiming Giuliani was warned by the feds in 2019 that he was the target of a Russian influence campaign that aimed to sway the outcome of the 2020 presidential election. The sensational reports coincided with a raid on Giuliani’s New York City apartment carried out by federal agents, purportedly as part of an investigation into the Trump ally’s dealings in Ukraine. Giuliani took an active role in investigating allegations that President Joe Biden and his family were involved in shady dealings with Kiev. The three reports seemed to insinuate that Giuliani was spreading Russian ‘disinformation’ by taking interest in the allegations.

But the provocative claim that Giuliani was informed that he was at risk of being ‘used’ by Moscow was quickly walked back. On Saturday, the Post acknowledged it had “incorrectly reported” that the FBI had warned Giuliani he was the target of a Russian influence operation. The paper also retracted its claim that the FBI had issued an identical warning to the conservative One America News Network (OANN). The channel had produced a documentary about Giuliani’s activities in Ukraine.

The two other outlets involved in the journalistic malpractice quickly followed suit. The NYT, which had reported that Trump’s attorney had received a “formal warning” from the FBI about the alleged Russian op, ran a correction saying he had, in fact, never received a “so-called defensive briefing.”

NBC made a similar concession, but insisted it got the story only half wrong. “The report was based on a source familiar with the matter, but a second source now says the briefing was only prepared for Giuliani and not delivered to him, in part over concerns it might complicate the criminal investigation of Giuliani,” it explained.

The outlets have remained tight-lipped about what led them to retract their claims. The Post declined to comment when contacted by CNN, but its amended story stated that Giuliani had denied he had been contacted by the FBI about the purported disinformation campaign. OANN also said the feds never reached out to it about “Ukraine or people associated with Ukraine.”

For its part, the New York Times seemed to have initially edited its online story without acknowledging it contained corrections. It later added a formal correction, however.

The revised reports are the latest in a string of salacious allegations related to Russia’s purported involvement in the 2020 election that were later walked back or fully retracted. In March, the Trump campaign sued CNN, WaPo and the NYT for “their reckless false reporting” about unsubstantiated claims that the ex-president colluded with Moscow.