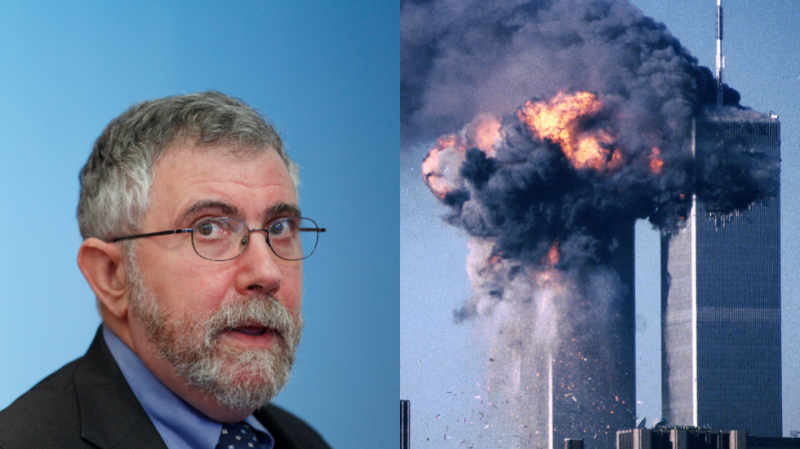 The New York Times columnist commemorated the 19th anniversary of the most deadly attack on US soil in spectacular fashion. In a tweet on Friday morning, he claimed that “overall, Americans took 9/11 pretty calmly,” that “there wasn’t a mass outbreak of anti-Muslim sentiment and violence,” and that then-president Bush “tried to calm prejudice, not feed it.”

Krugman was swiftly ridiculed. Commenters reminded the esteemed economist that anti-Muslim prejudice actually skyrocketed after 9/11, with FBI data showing a more than tenfold increase in hate crimes over the preceding year. Others reminded him of wholesale roundups of Muslims, which saw hundreds jailed following tips to an FBI hotline, and according to one lawsuit against the federal government, physically abused in prison.

Bush too was far from the voice of reason Krugman remembers him as. The Republican leader presided over an international program of detention and interrogation, which saw terror suspects snatched from the streets, subjected to medieval-style torture, and detained without trial for years. Many of these detainees were never charged with crimes and some died as innocent men in the eyes of the law.

Bush launched two massively destructive Middle Eastern wars on the back of 9/11, wars that two decades later the US is trying to extricate itself from. Krugman did at least call these wars “disastrous,” but said nothing on Bush’s activities at home.

Domestically, Bush expanded surveillance, including the National Security Agency’s warrantless wiretapping program that illegally collected phone and internet data on millions of Americans. Even when warrants were acquired, Muslim-American activists, officials and professors were targeted by Bush’s spying apparatus. Commenters on Twitter reminded Krugman of these inconvenient facts.

Krugman has a history of inflaming online anger. Only a week ago he took a jog in New York City and posted pictures to ridicule the notion that the city was in the midst of a crime wave, as President Donald Trump and others have suggested. Actual crime statistics tell another story, with murders and shootings both up since last year, and commenters mocked Krugman’s claim that stories of “urban anarchy are almost entirely fantasy.”

Back in January, he embarrassed himself by announcing he had found “child pornography” on his computer, suggesting he was targeted by scammers, something he claimed had also happened previously.