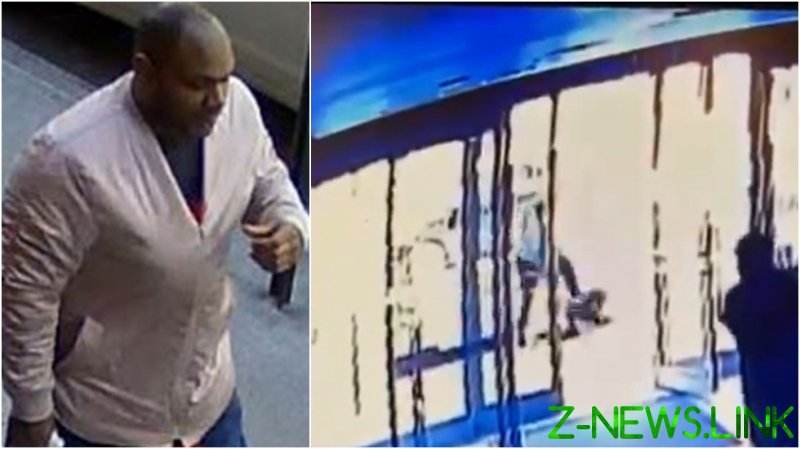 The Hate Crimes unit called on the public for help in identifying the perpetrator after the attack on Monday morning, which saw an African American man of heavy build brutally punch and kick a 65-year-old woman outside a luxury apartment complex, continuing to stomp on her head after knocking her to the ground.

The attack was captured in graphic surveillance footage, which shows several witnesses, allegedly including at least one security guard, watching the beating but doing nothing to intervene. The suspect was allowed to walk away from the scene.

“This is a heinous attack on a 65 year old Asian lady that occurred this morning in front of 360 west 43rd street,” the NYPD’s Asian Hate Crimes Task Force said in a now-deleted tweet. “The cold hearted building security guard not only failed to render aid, he closed the door on the victim.”

The woman, who has not been identified, suffered serious injuries and was taken to a hospital for treatment, police said, adding that the suspect made anti-Asian comments during the attack, reportedly telling the woman, “F**k you. You don’t belong here.”

Employees at a building near the apartment complex told the New York Daily News that they recognize the suspect, saying they believe he is a local homeless man who frequently wanders the neighborhood and spends time at a nearby park.

Earlier on Monday, the Hate Crimes unit also shared footage showing an assault on a Manhattan subway car, in which a young Asian man appears to be choked until he loses consciousness. It is unclear what sparked the brawl, but the NYPD also requested public information on the incident, including the date and time it occurred.

The violence comes as the NYPD reports a steep climb in anti-Asian hate crimes in the city. So far in 2021, the department has tallied 31 racially motivated crimes against Asians, up from just 11 in the same timeframe in 2020. The uptick prompted police to launch a separate Asian Hate Crime Task Force late last year, while more recently the NYPD said it would step up patrols and outreach in Asian communities.

“The next person you target, whether it’s through speech, menacing activity or anything else, walking along a sidewalk or on a train platform, may be a plainclothes New York City police officer. So think twice,” NYPD Commissioner Dermot Shea warned would-be attackers last week.