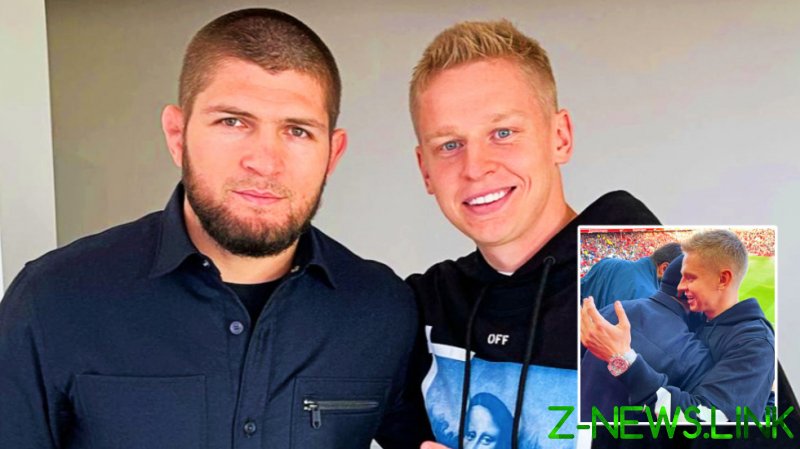 Premier League wideman Zinchenko became the latest star to cop negative comments as a result of a portrait between Russians and Ukrainians, with some viewers making fiery remarks about the relationship between the two countries after he posed with MMA great Nurmagomedov on Sunday.

Injured Zinchenko joined football-loving Nurmagomedov as City drew 2-2 at Liverpool, hugging and standing together at the hosts’ famous Anfield stadium in a show of mutual admiration.

“And still,” the player for the reigning top-flight title holders wrote afterwards, accompanying the snaps by assuring Nurmagomedov that he remains a champion almost a year after his dramatic retirement from the UFC.

“That was a pleasure to watch the game and have chat with you.”

Not everyone was as thrilled as former Russian Premier League player Zinchenko by the meeting.

“You play for the national team under our coat of arms and flag,” said one, in an echo of some of the suggestions received by Russian champion Maria Lasitskene and Ukrainian bronze medalist Yaroslava Mahuchikh after they hugged following the 2020 Olympic Games high jump final.

“You defend the honor of the country,” they added, telling Zinchenko to avoid dealing with “representatives” of Russia before concluding: “Especially in public.”

While the illustrious duo received a deluge of approval, including from sporting figures such as Russian Formula One driver Nikita Mazepin, the volume of unimpressed comments was noticeable.

One commenter warned Zinchenko that Nurmagomedov is a “fan of [Russian president Vladimir] Putin and [Chechen leader Ramzan] Kadyrov.”

“Do you think with your own head or do you absolutely not care who these people are?” they asked.

That may have contributed to Nurmagomedov later adding a post reinforcing their respect. “I wish you good luck in everything,” he told Zinchenko. “Even if someone doesn’t like it.”

Tensions have surfaced over snaps between sportspeople from the countries this summer. Ukraine’s Deputy Defense Minister publicly announced that Mahuchikh would be required to explain her actions in the context of what they described as the ongoing “Russian-Ukrainian war” shortly after her ecstatic photos with Lasitskene, and Ukrainian sprinter Ihor Tsvietov caused controversy when he appeared to refuse to stand alongside two Russian medalists at the Paralympics.

Discussing the reaction to Zinchenko’s photos, former Spartak Moscow president Andrei Chervichenko said that the critics had been “brainwashed” and needed “pity”, adding that he believes “outrageous idiocy” is widespread on the issue.

“Sooner or later, the situation will improve,” he predicted to Championat. “I treat these people with sympathy, as they are zombified. I’m not surprised at all. “

Honorary President of the RFU and former long-serving FIFA vice-president Vyacheslav Koloskov told the outlet that the matter was barely worthy of credence.

“We looked, closed the page and forgot,” he said. “The more we react, the more conversations there will be. What should we do now? Call the Ukrainian ambassador here?”

Speaking on his promotional tour of England over the weekend, Nurmagomedov admitted that he does not care whether people disagree with his opinions.