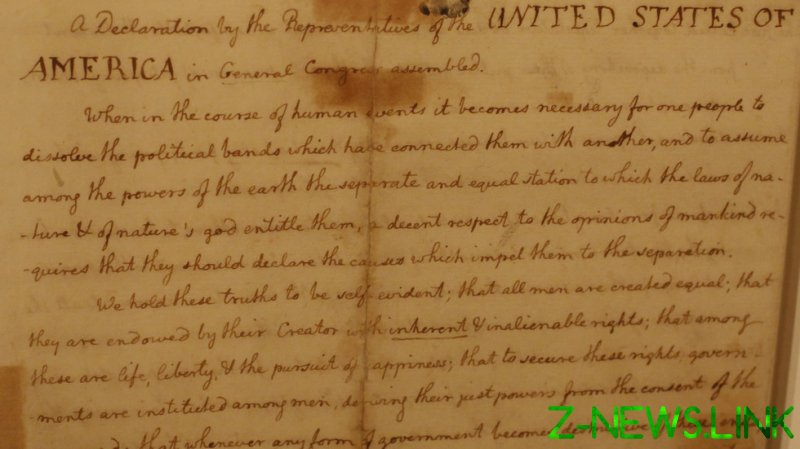 It has become an annual tradition for the organization to mark Independence Day with a reading of the historic document, but this year’s rendition came with a disclaimer.

“[A]fter last summer’s protests and our national reckoning on race, the words in the document land differently… It famously declares ‘that all men are created equal’ even though women, enslaved people and indigenous Americans were not held as equal at the time,” the outlet, which receives public funding, explained.

This wasn’t NPR’s only grievance with the 245-year-old declaration. A reference to “Scotch & foreign mercenaries” was later edited out of the text, but “a racist slur about Native Americans” (a line denouncing internal strife provoked by “merciless Indian Savages”) survived the revisions. The document was also stripped of criticism of the slave trade in a bid to win support from southern colonists, NPR reported.

On Twitter, NPR took a similarly critical approach towards the world-changing decree. The outlet prefaced a thread containing the full text of the document with the observation that it contains “flaws and deeply ingrained hypocrisies.”

The commentary didn’t sit well with many on social media.

Several people called for NPR to be “defunded,” while others said that they had stopped donating to the organization due to its racial-tinged reporting.

Others argued that NPR was being unfair, noting that any political document written more than two centuries ago will be considered flawed by modern standards.

For some, NPR apparently didn’t go far enough. A particularly zealous opponent of the text said that the Declaration of Independence was “signed by WHITE MEN IN WIGS and it’s a lie!”

There were also more nuanced takes, however. The document may have been flawed but it nonetheless “established the best hope for all of us,” one comment read.

NPR wasn’t alone in sharing a provocative interpretation of Independence Day. US Representative Cori Bush made headlines after suggesting that the holiday is about freedom for white people, but signifies “stolen land” and oppression for blacks.