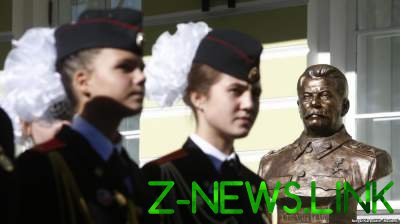 To install a monument to Stalin on the territory of the College was offered by the town hall.

In Novosibirsk (Russia) collective technical College named after Pokryshkin opposed the government initiative to erect a bust of the Soviet dictator, Stalin Yoshio on campus.

The Director of College Galina Calycina wrote a letter to the mayor of the city Anatoliy Lokaty in which he called the reasons for the bust of the leader should not appear on campus.

“Without belittling the achievements of Stalin’s government, we must not forget about the tragic pages of history associated with its name, the events that have affected a sufficiently large number of families not only Novosibirsk, but all of the Soviet Union”, – she wrote.

Also, the Director noted that during the life of Stalin was ambiguous and complicated relationship with the marshals Zhukov, Rokossovsky, by Pokryshkin, whose busts are already in the memorial and historical Park on campus.

28 September in Novosibirsk will be held re consideration of the proposal of the initiative group on the placement of a monument to Stalin. In turn, the Stalinists do not understand why the mayor’s office proposes to install a bust contrary to the wishes of the staff of the College and believe that they are fed empty promises.