Home / policy / Novaya Gazeta reported about “the queue of ambulance” at the hospital in St. Petersburg 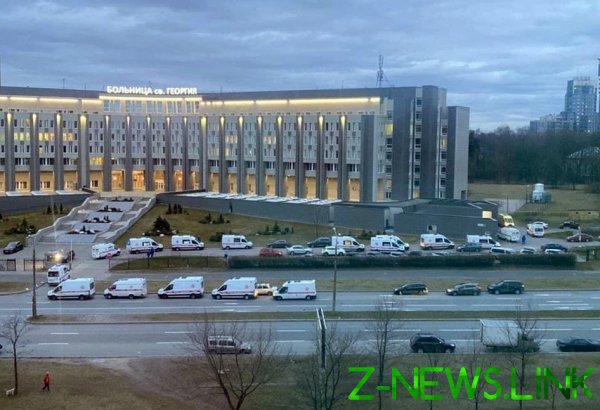 You are not lying

The hospitals of St. Petersburg — queue again from “fast”. Officials say the situation “is about to improve”

Near St. Petersburg hospitals ambulance again stand in hours-long queues. Previously, a similar picture could be observed in the first day of each hospital, which only opened as “cavigny”. Explained that the hospital is still empty, it must be filled out. Two weeks later, after Vladimir Putin announced the commutation of “high alert”, turns appeared again. Now explanation is crowded hospitals.

“Today a grandmother just cried: asked why it was brought to us, if we have no beds. It was seven in the evening rode in the ambulance, and we in the Department were approximately four in the morning. To put it nowhere berths left. Suggested the bed, she lay on it refused. Went down in the pit and lay down on the metal chairs.” This is the story of a doctor from Pokrovsk hospital (the name it is known “New”) on how to pass them in the last days of hospitalization of patients with pneumonia. 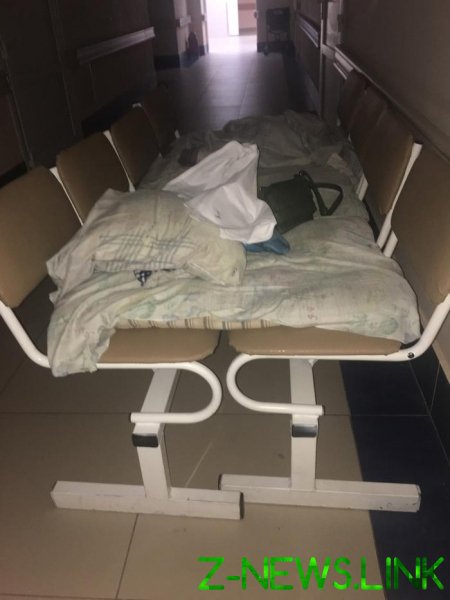 An improvised “bed” in Pokrov hospital of St. Petersburg. Photo sent in by reader “New”

According to the order of the head physician “temporary conversion” from may 8, for the reception of patients with COVID-19 there was a total of 543 infectious beds. In the morning on may 24 in these areas has already placed 652 patients. By the morning of 25 may, 8 people died, 25 more were discharged. But the influx of patients continued. Ambulance brought 50 people, four were sent home to be treated, and 46 patients were hospitalized. Total may 25 in Pokrovskaya hospital already 665 people. And three more sat in the waiting room. Their place was already nowhere. The entire bed capacity of the hospital, as stated in the order, — 646 beds. The hospital was filled not just infectious chamber, there is banal over the bed. Reclining seats did not remain in principle.

“We’re out not only beds and a couch, but ended up and blankets and pillows, and linens for the sick — continues the doctor’s intercession. Is something awful. In some corridors there is nowhere to put the couch, there is not pass. Emergency rooms, 35 beds are 43 patients.

If someone will prove by numbers that we still have empty beds, it is not so.

Part of the premises converted into sanitary systems, part just blocked gateways. As part of the berths utilizes medical staff, because some live in the hospital. Otherwise, no one to work. As a hotel we did not received”.

Elderly people and those who are brought to the hospital in critical condition, was in a very difficult position.

“We brought in heavy intercession of the elderly patient with pulmonary edema, but the car was so that the passage was closed, to pass without turn, we could not, — told the “New” physician private ambulance Leo Averbach. — Called in the car of the responsible physician. He said still there is no space to do anything we can’t. Relatives said, well bring him home. Took. We further fate of the patient does not know.”

But managers continue to guide the ambulance in intercession. Because in St. Petersburg, 23 hospitals selected as “govenye” — and almost all, according to Lev Averbakh, the situation is the same: places left.

“Everyone is working with Overdrive, people put nowhere, says Dr. Auerbach. — There is no space in “deuce”, in 122nd, Botkin, in intercession… Only recently opened under kovid hospital on Suvorov, but there are only 60 beds, is the elephant a pellet, and places are already there, too”.

Hospitals are, where places for patients with pneumonia, lists and the publication of “Dr. Peter”: in 20 patients already placed in the operating room, the hospital named after Semashko tried to unload in the end there 231 bed remained “only” 259 patients. 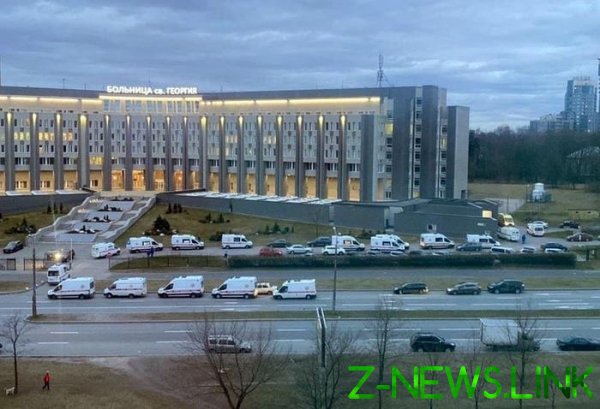 April 2020. A queue of ambulances at the hospital SV. George in St. Petersburg. Photo: facebook.com

“Yes, in all city hospitals Overdrive — confirms the doctor in the Alexander hospital (name and specialty known “New”). — We also have a large overload. Under couId we have allocated 500 beds and patients today are well over eight hundred. There is no space, people put nowhere. There is the sanitary norm is 7.5 square meters per infectious patient. And we in the chamber 22 square meters have to put up to five beds.”

City hospital № 15 were converted at kovid week and a half ago, but there are already no seats available.

“We have allocated for pneumonia only one case, that 165 beds — says the doctor in the 15 th city hospital (name and position known “New”). For the first 13 hours it was filled halfway, we took 89 patients. We have one of the few hospitals where there was a large queue soon even in the first day because we already knew about such situations in other hospitals and came prepared. But now infectious body is full and overflowing, we work with an overload”.

The problem was solved with the help of ambulance doctors: they were given new orders.

“Three weeks ago was hospitalized almost everyone who called the ambulance — says Leo Averbach. But hospitals began to be filled extremely fast. Then we all drove to CT, the CT people were hospitalized. Now

the doctor comes in, listens to the patient and looks whether there are indications for hospitalization, if not even, no luck on the CT. So now KT is necessary “to deserve””.

As reported by “New” in the health Committee of the Smolny, in total in Petersburg created 11501 beds for patients with pneumonia and COVID-19, and 11 percent of its beds, the assurance of the officials, free. In other words, there are 1265 places. On the question of why then put on the chairs of patients in overcrowded hospitals, the Committee said.

Meanwhile, the head of the Interdepartmental Commission to combat coronavirus in St. Petersburg, the chief physician of the National medical center named Evgeny Shlyakhto Almazov sure that the situation is under control, it is stable and even that’s improved.

“While the system can withstand, he said “New”. — A few days — and in the system I think will be better. The number of critically ill patients admitted to the hospitals, we have already reached the ceiling. The last 3-4 days the numbers remain stable, no growth”.

A completely different picture gives cosgrave. As follows from the answer to the query “New”, in St. Petersburg the number of patients “with signs of pneumonia and coronavirus infections” requiring hospitalization, “has no tendency to decrease”. Daily, reports the Committee of the hospital comes at 650-700 patients, and “a burden on the healthcare system does not decrease”. Where are those 1265 empty beds and why they are empty, officials said. But he added that “in St.-Petersburg the process of conversion of healthcare institutions will be continued”. 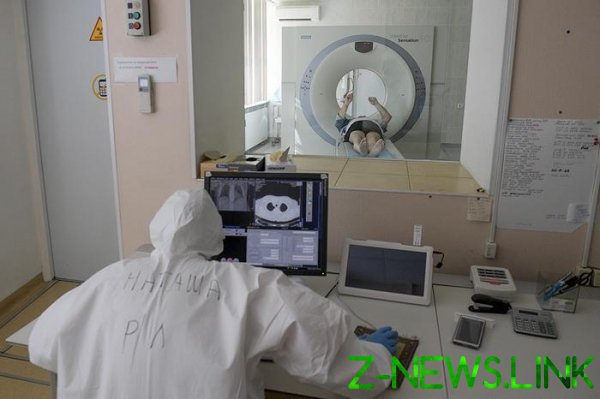 Department of computed tomography in one of the hospitals of St. Petersburg. Photo: Alexander Halperin / RIA Novosti

In St. Petersburg is another, so to speak, hospital. Pavilion of the exhibition complex “Lenexpo” was converted into a temporary hospital, blocking 500 modules with two bunks in each, for a total of 1000 seats. It was assumed that this would be hospitalized patients with a mild form of the disease. Those who should be treated at home, but can not: or lives in a communal apartment, where it is impossible to maintain the quarantine or in the apartment of an elderly relative, or a shot to do no one, or there are other reasons.

At first, the hospital really started to translate “light” in the “Lenexpo”. But by the conditions there led to a flood of complaints from patients. They compared the modules with the dressing without curtains, complained about the noise, lack of food, the queues in the toilets, the stench and, most importantly, wild cold: patients with pneumonia, had to sleep in sweaters and hats to stay warm. In the end, the mere mention of the translation in “Lenexpo” from a normal hospital began to call in patients horror.

“Lenexpo” was checked, everything meets the requirements of Rospotrebnadzor, said the “New” Dr. Evgeny Shlyakhto. There hospitalitynet people who can’t go home. This is not a hospital where patients stay, and the place where finish the cure”.

Of the thousands of beds in “Lenexpo” today employed three hundred, that is two thirds empty. Perhaps and respond to the Governor fluently, when he talked about 11 percent. But this, again for the doctor Shlyakhto, “not the hospital”. And hospitals, according to different hospitals, not unloads. The health Committee said the “New” in “Lenexpo” organized “474 additional beds for patients with coronavirus”, there is already going to put “patients in condition of medium gravity”.

And instead of PostScript. While emergency vehicles were standing in line, on the territory of the Pokrovskaya hospital, the group of priests conducted the funeral of those who died while working with an overload. The relatives stood and sat close groups. Readers sent in “New” photos of the procedure. The mask in the picture only one person. Apparently, the current hospital overload not enough. The Committee on health on this occasion I was only able to say that the hospital management for such ceremonies is not responsible. In addition, according to the Committee, the hospital (with a status, add, infectious) was held not at all funerals, and the Liturgy in honor of the last day of the Easter holidays. That, apparently, makes all the difference: the faithful came there to get for the repose and in health.