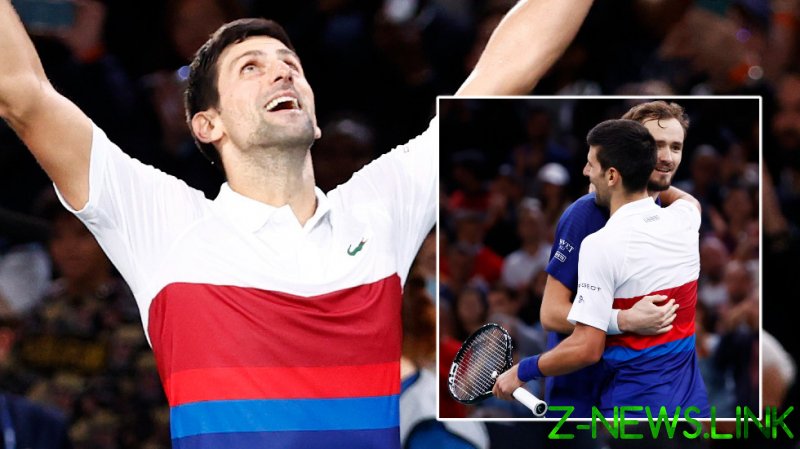 In a hugely-anticipated final between the two best players in the world on form and ranking, Medvedev broke Djokovic early on his way to taking the first set 6-4.

That seemed to provoke brilliant Djokovic to raise his level, storming back to reply with a 6-3 second-set win.

The Serb saved three break points when he was 5-3 ahead during that set, noticeably mixing up his play.

A 16-point game ended with a Djokovic ace as he appeared to be growing in confidence in an ominous sign for his Russian opponent.

Despite breaking back after going 5-1 down in the third set, Medvedev could not repeat that feat in the remainder of the decider, succumbing 5-3.

The result continues a compelling battle for supremacy between the superstars which has now seen the identity of the winner change hands in each of their last six matches against each other.

Two of those matches have been Grand Slam finals this year: Djokovic won the Australian Open in straight sets before Medvedev repeated the trick on the man who is rapidly becoming his arch-rival at the US Open final.

That truly announced Medvedev as the likely successor to Djokovic, Rafael Nadal and Roger Federer as the dominant modern player.

Djokovic won the tournament for a sixth time and recorded a record-breaking 37th ATP Masters 1000 title.

He has now won six of his ten ATP meetings with Medvedev, although it was only Djokovic’s third victory in his seven most recent contests against the 25-year-old.

The showdown represented the first Paris final to feature the top two players in the ATP rankings since Swedish great Stefan Edberg played German icon Boris Becker in the 1990 final.

The next major event is the Nitto ATP Finals in Turin, which run from November 14.