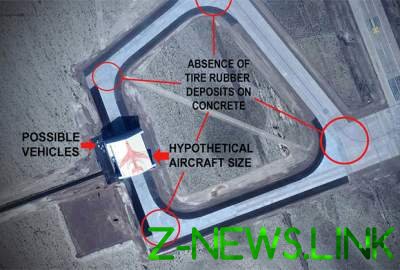 In the vicinity of Area 51 enthusiasts and journalists over the past year and a half managed to make a number of observations.

Unusual activity around Area 51, a secret military base in Nevada, discovered by enthusiasts, may indicate the test developed B-21 Raider, the first American heavy bomber over the past thirty years.

“We don’t know exactly what is happening in Area 51, but after visiting the area in early November, we are confident enough that now there’s something significant,” say the authors.

In the vicinity of Area 51 enthusiasts and journalists over the past year and a half managed to make a number of observations. In particular, 13 November 2017 there was seen a F-117 Nighthawk, a single subsonic tactical stealth attack aircraft. The aircraft was covered with a tarpaulin and transported by truck to the base side.

Earlier in the day, the observers met the military, dressed in civilian clothes and carrying large hand Luggage. Later the man was out of sight of observers.

The next day, other observers in the area of Area 51 took pictures of the F-117 Nighthawk flying with F-16, a multifunctional lightweight fighter of fourth generation. The last aircraft was equipped with an IRST (Infra-red search and track) designed to track via infrared radiation of a jet aircraft and helicopters.

In 2016, the journalist Tyler Rogoway from The War Zone reported the appearance in the center area 51 of the large hangar and the runway. The new hangar is much larger than the room for the B-2 Spirit heavy stealth strategic bomber.

The Aviationist believe that Area 51 is testing a system of suppression of infrared radiation by the body of the aircraft and its engines, presumably for developing B-21 Raider.

Adopting this heavy bomber capable of carrying a thermonuclear warhead is planned in 2025. The aircraft to replace the Rockwell B-1 Lancer and Boeing B-52 Stratofortress. The cost of one B-21 Raider approaching 600 million dollars.