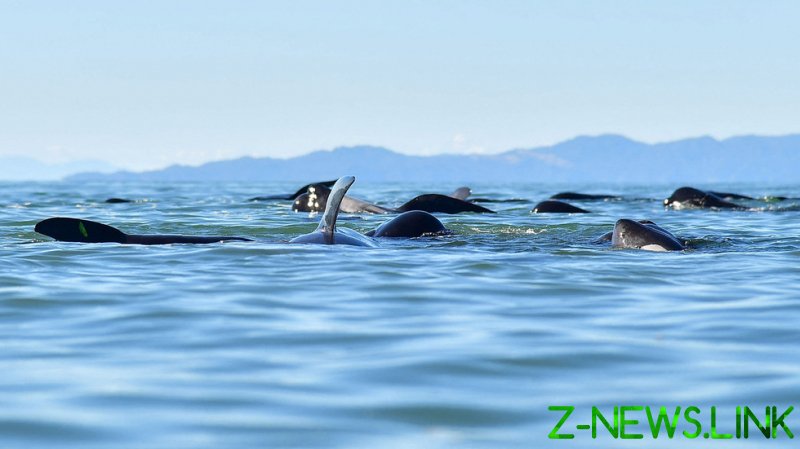 Checkpoints were installed at Wellington’s Pauatahanui wildlife reserve this weekend, after a pod of orcas were sighted in the waters nearby, local media reported.

Police have warned people not to travel to the area, currently under lockdown because of Covid, and blocked a state highway in the area so non-residents wouldn’t be able to reach the site.

“A pod of orca is currently breaching social-distancing guidelines off the Pauatahanui inlet – but we’re urging people not to do the same thing,” police said on social media. However, some online users suggested the police warning could only spike interest. “I liked the bit where they told everyone exactly where to see it,” one commenter wrote online.

Local animal activists and wildlife protection organizations confirmed that at least seven killer whales had been seen in the area, but also warned whale watching enthusiasts to stay away and stick to restrictions, as mammal spotting doesn’t classify as essential travel.

Some, however, managed to get a glimpse of the orcas and shared their footage online, saying no “safe social distancing guidelines” were breached.

The orcas, who have been chasing stingray and seemingly enjoying humans’ lockdown with no boats on the water, are “displaying normal feeding behavior,” a conservation department’s spokesperson told local news, adding that there are no concerns for their wellbeing at the moment.

In July, an orca calf died after getting stranded on rocks near Wellington. Rescuers and volunteers were trying to save the mammal – named Toa – for weeks, hoping it could be reunited with family. Some suggested that the killer whales currently swimming in the area could be from Toa’s pod.

“We have to be alert to the fact that it might be his family, and we can’t rule it out until we get photo IDs,” marine biologist Ingrid Visser told local media, adding that Covid restrictions will make it harder to identify the mammals. “At this stage nobody’s got close to the orca because of the level 4 lockdown,” she said.