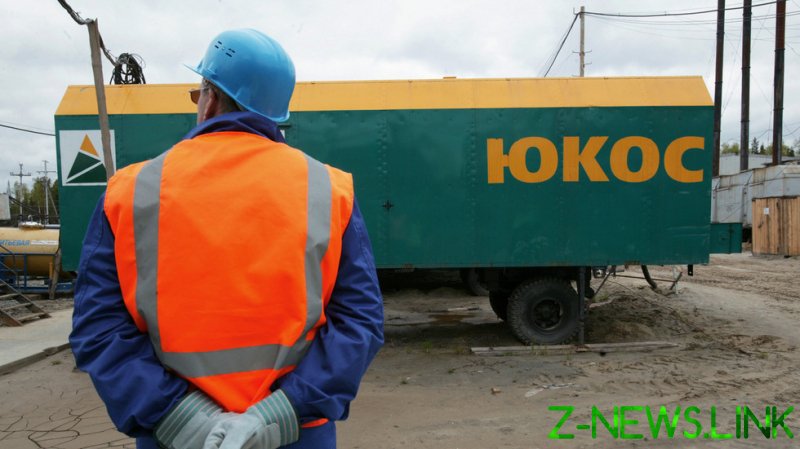 On Friday, Paul Vlas, the chief legal advisor to the court, issued an independent advisory opinion stating that the original ruling, which Russian lawyers describe as “non-binding.” It backed a previous decision which handed the colossal sum to oligarchs who lost cash when Yukos was bankrupted, should be upheld. The financiers behind the now-defunct firm say its assets were seized over an outstanding tax bill in a move that amounted to state appropriation.

A spokesperson for the Russian Ministry of Justice said in a statement to RT that, while the decision, issued “without any reasonable basis,” was a setback, it hoped it would not influence the eventual outcome of the case.

The official said that the advice “is advisory, not binding for the court,” and added that the Prosecutor General had “ignored evidence provided by the Russian Federation showing legal errors made by [earlier court rulings], as well as unlawful actions of former Yukos shareholders during the alleged ‘investment’ process and the legal proceedings.”

Moscow’s legal representatives have been appealing the settlement, which they say did not take into account the country’s domestic laws against corruption and fraud. Mikhail Khodorkovsky, the former head of the company, once among Europe’s largest businesses, spent a decade behind bars after a conviction for illicit financial dealings. Under the weight of a $27 billion tax notice from the revenue service, and facing freezing of its assets, the firm went under. Its wealthy backers have since been litigating the case in international courts.

Russian Justice Minister Konstantin Chuychenko has previously said that the case is part of a “legal war” being waged against the country in international courts. “The situation is very difficult and serious,” he said. “Russia must adequately defend itself, and sometimes even attack back.”

In December, Moscow’s Constitutional Court, one of its highest judicial authorities, ruled that Russia could refuse to pay the settlement sum if appeals eventually fail. As well as parallel cases in the UK and US, the complaints have been heard by a court in The Hague, which awarded the company’s former shareholders a $57 billion payout from the Russian government earlier this year. The Netherlands claims jurisdiction under the terms of the Energy Charter Treaty, which Russia is a signatory to but never ratified. It contains provisions that allow disputes to be settled by international courts.

According to the judges, while the country’s government of the day began the process of signing up to the pact in 1994, it did not have the authority to make national laws inferior to international agreements or the rulings of foreign tribunals. The ruling declared there is no basis on which decisions such as those based on the Energy Charter Treaty can “challenge the competence” of Russian courts when they give verdicts. Therefore, the jurists conclude, adhering to the Dutch court’s demands for a settlement would be “unconstitutional.” This could pave the way for Moscow to refuse to hand over funds if it loses the long-running legal battle.

Yukos’ shareholders have fought a series of separate legal challenges to try to compel Western nations to seize Russian assets as collateral in case of non-payment, but multiple courts have rejected these requests.