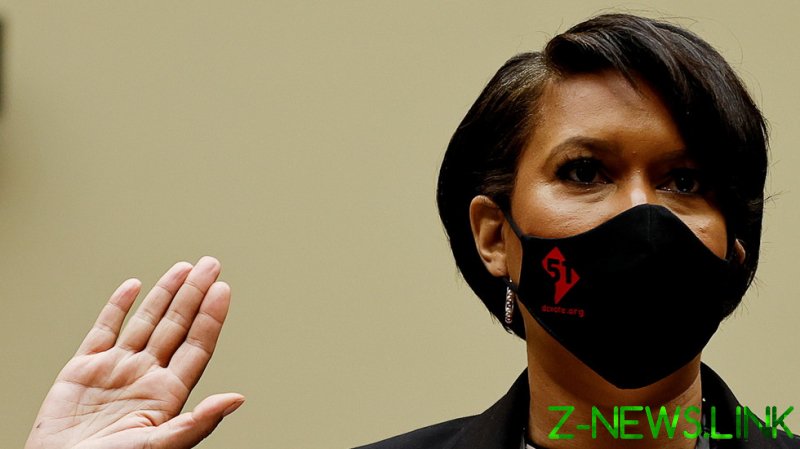 In a photo obtained by the Washington Examiner, Bowser can be seen sitting at a table inside a room full of largely maskless guests without a mask on. The mayor does not appear to be eating or drinking.

The photo was taken at a dinner party that followed a rooftop wedding ceremony that the mayor officiated on Saturday, Bowser’s office confirmed in a statement to Fox 5 on Sunday.

“The Mayor wore a mask indoors in compliance with the mandate, and the organizers and venue staff worked to create a safe environment for the staff and guests,” the office said.

The statement noted that people should mask up “at indoor public settings to protect yourself, your loved ones and your neighbors.” When pressed about the photo, which shows Browser seemingly flaunting the regulations, the office insisted that if the mayor was indeed spotted indoors without a mask, the photo must have been taken “during the indoor dinner, when she was eating or drinking.”

Bowser’s indoor mask mandate took effect July 31 at 5am, meaning the gathering falls under its scope. This is in contrast to another outing attended by the mayor on Friday, where she posed for a group photo with comedian Dave Chappelle. The photo was taken just hours before the new order took effect requiring all people regardless of vaccination status to wear masks indoors.

While no mask mandate was in place at the time, the organizers demanded that visitors mask up anyway. The photo itself was panned by conservatives, who accused Bowser of making a mockery out of her own guidance.

Adding fuel to the fire, another photo taken on Friday showed her attending a maskless celebration of her upcoming birthday.

In the statement on Sunday, Bowser’s office failed to address the Chappelle controversy, but noted that the birthday party photo was taken outdoors, while taking a swipe at conservative media.