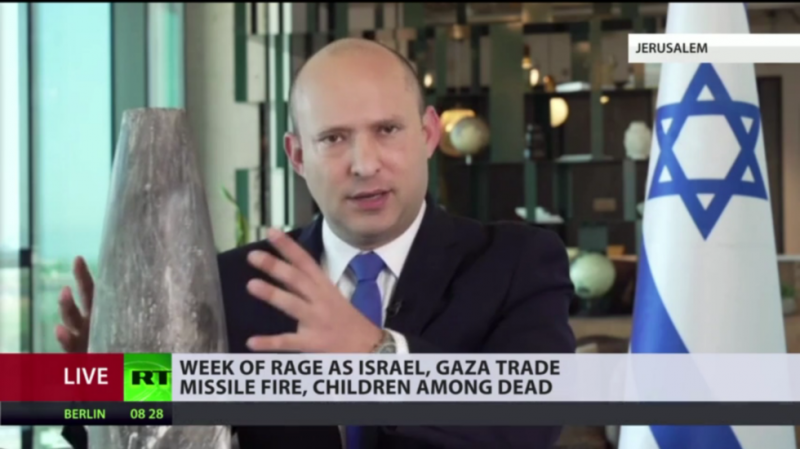 The Israel Defense Forces (IDF) plan on taking down Palestinian militant group Hamas’ operatives and their command centers, while all options remain on the table, Bennett, the leader of the right-wing Yamina party, a member of Knesset and former defense minister, told RT on Sunday.

“Last Monday, unprovoked, Hamas started shooting rockets at Israel. They decided when this round [of the conflict] would start. Israel will decide when it ends,” he said.

Bennett argued there was “no equivalence” between the actions of the IDF and Hamas, despite the fact that Palestinian casualties vastly outnumber those killed in Israel. When asked if Israel views the deaths of civilians in Gaza as collateral damage, Bennett said, “No.”

“No civilian death is acceptable, and that’s why we abhor the fact that Hamas uses civilians as human shields,” he said.

The Israeli politician accused Hamas of “murdering its own people by hiding cowardly behind civilians, by hiding its command centers within buildings that belong to hospitals or schools.” He added that the group bears “direct responsibility for all the deaths.”

Bennett said Israel was only bombing Gaza in response to volleys of rockets launched at Israeli cities. To illustrate his point, he showed what appeared to be a used rocket shell.

“This rocket over here landed this morning in a home in Sderot next to the bed of a 9-year-old child,” he said while showcasing the item live on air.

The former defense minister stressed that the conflict will only end once Hamas lays down arms and stops attacking Israel.

“If they use their resources to build schools, hospitals, to build a future for their children – there will be peace. If they continue building more and more terrorist bases – [the conflict] will go on for a while,” Bennett said.

The dramatic escalation between Hamas and Israel was preceded by clashes between Arabs and Israelis in Jerusalem.