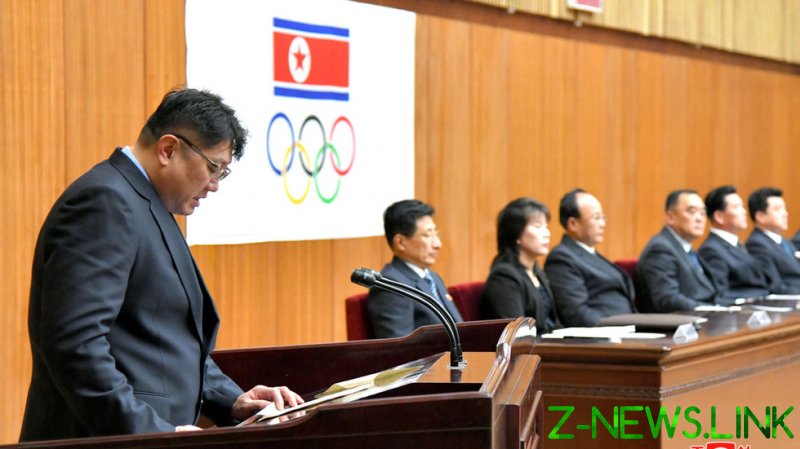 “The Olympic Committee of the Democratic People’s Republic of Korea decided not to participate in the 32nd Olympic Games at the proposal of the members in order to protect athletes from the global health crisis caused by virulent virus infection,” Pyongyang’s Ministry of Sports said in a statement on Monday.

The decision was made following an Olympic committee meeting late last month, where Sports Minister Kim Il-guk was present, the ministry added. Earlier reports in state media said officials had met to discuss “practical issues linked to actively organizing public sport events,” though no mention was made of the games, scheduled to run from July 23 until August 8.

Though originally set for the summer of 2020, the Tokyo Organizing Committee reluctantly postponed the event for one year over safety concerns linked to the pandemic, a first in the event’s history. The committee repeatedly said the games would go ahead as planned, but relented after Canada and Australia said they would not be sending teams to compete. The US Olympic Committee similarly pressed for a postponement last March, also citing coronavirus fears.

Pyongyang’s sudden withdrawal will deprive the two Koreas an opportunity for engagement, as officials in Seoul had hoped they would offer a chance for dialogue, according to Yonhap News. During the 2018 Winter Olympics in South Korea, the two sides held an opening ceremony under a Korea unification flag and fielded a joint women’s ice hockey team. Kim Yo-jong, the sister of North Korean leader Kim Jong-un, also attended the event, marking the first time a member of the ruling Kim family visited the south since the Korean War. The games helped to clear the way for three different summit meetings between Kim and South Korean President Moon Jae-in in the following months, as well as rare sit-downs with then-President Donald Trump.

North Korea has taken strict measures against Covid-19, with the already-isolated nation shutting down its borders over the health crisis. Though officials maintain the country has zero coronavirus infections and that its containment policies have worked, outside observers and health experts have voiced doubt about the claim.