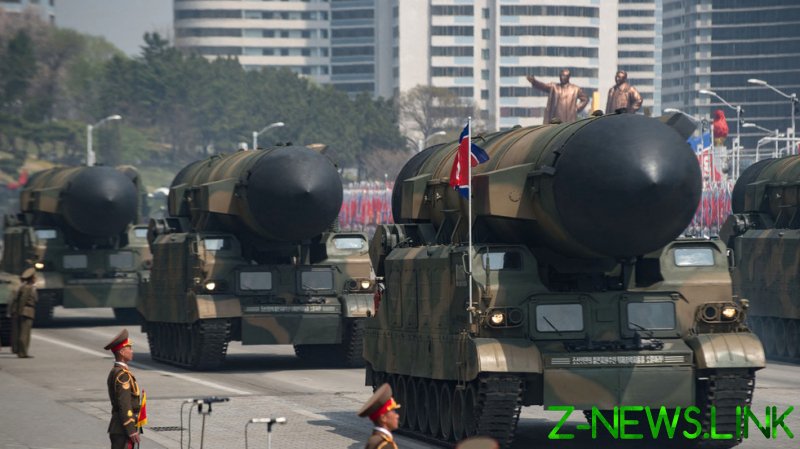 North Korea has launched an unidentified missile toward the Sea of Japan, South Korea’s military and Japan’s coast guard reported on Thursday, with conflicting media reports regarding where the projectile landed.

Japan’s coast guard issued a statement which claimed the missile fell inside Japan’s exclusive economic zone, with the projectile touching down off the coast of Japan’s northern Aomori prefecture at 3:44pm local time (6:44am GMT). Authorities advised vessels at sea to exercise caution and stay away from any suspicious objects.

South Korea’s Yonhap news agency, citing the country’s military, claimed that the projectile launched by the North could have been the intercontinental ballistic missile Hwasong-17 – the largest of its kind developed by Pyeongyang to date. The missile reportedly took off in the vicinity of the Sunan airport in Pyeongyang before travelling on a “lofted” trajectory high into space.

South Korea’s president, Moon Jae-in, strongly condemned Thursday’s launch, describing it as a violation of numerous UN resolutions. Moon accused the North of breaking a moratorium on testing intercontinental ballistic missiles, which the reclusive nation had announced back in 2017 following talks with then-US President Donald Trump.

Since the start of the year, Pyeongyang has conducted over a dozen test launches, with the South Korean military and their US allies claiming that at least two of those launches – on February 27 and March 5 – involved the Hwasong-17 missile. Despite believing the projectile to be an intercontinental ballistic missile, the rockets in those two cases did not “demonstrate ICBM range,” the Pentagon’s spokesperson, John Kirby, noted on March 10. The US official added that the purpose of the tests was “likely to evaluate this new system before conducting a test at full range in the future, potentially disguised as a space launch.”

North Korea refused to divulge details regarding the projectiles fired at the time, merely saying that the country was testing components for a reconnaissance satellite system. DPRK Supreme Leader Kim Jong-un announced earlier this month that Pyeongyang was planning to send several satellites into orbit to monitor America’s military activities.

If reports are confirmed that the projectile detected on Thursday was indeed the Hwasong-17, that would mark the first test of the DPRK’s intercontinental ballistic missile at full range since 2017.

US, Japanese and South Korean officials say that they expect more missile tests by North Korea in the coming weeks, with the 110th anniversary of the country’s founder, Kim Il Sung, fast approaching.