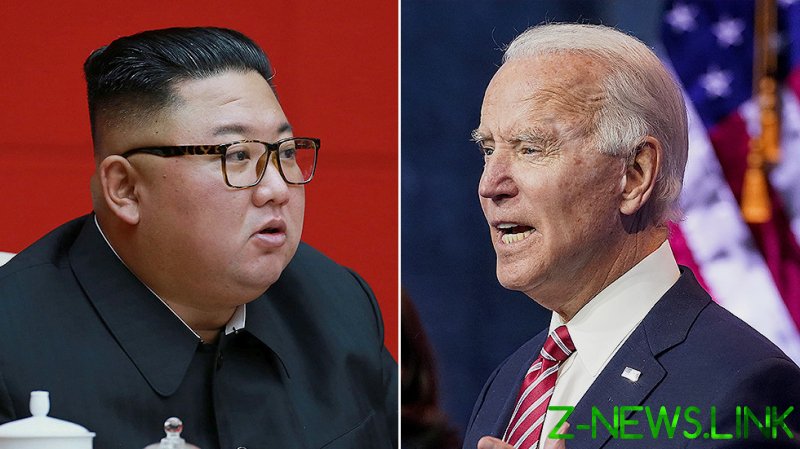 On Tuesday, the United States accused China of “flagrant violation” of sanctions on neighboring North Korea, offering rewards of up to $5 million for information about what has gone on.

Throughout his tenure as president, Donald Trump made the denuclearization of North Korean one of his key foreign policy priorities and had previously leaned on Beijing for help against Pyongyang, causing a standoff in 2017.

Now, as the sun sets on his administration, there’s little question that he’s failed in that goal. Kim Jong-un is escaping with enhanced nuclear and missile capabilities, and China has little interest or incentive to push its neighbor harder.

But what happens now Biden is presumed to be on his way to the White House? Might we see another flashpoint between the US and North Korea? And how might Biden approach Pyongyang, given he’s likely to have little appetite for Trump’s “summit diplomacy”? A bumpy ride may lay ahead, which could also become a cornerstone of continued US-China confrontation.

Just short of four years ago, the Trump administration came to office and signaled its intention to pursue a policy of “maximum pressure” against North Korea.

The intention was to get Pyongyang to surrender its nuclear weapons by force, so it squeezed it with ever tougher sanctions and threatened military action if it did not negotiate. Things got heated, and Trump publicly threatened to “totally destroy” North Korea on the floor of the United Nations, with Kim responding via a series of nuclear and missile tests.

Trump’s escalation of tensions and creation of crisis, however, succeeded in getting China to cooperate on increasingly tougher sanctions and, more significantly, led South Korea to open negotiations that would lead to a series of historic meetings between Trump and Kim.

Yet, these meetings ultimately proved fruitless. The White House’s insistence on complete denuclearization was incompatible with North Korea’s determination to hold on to its nuclear program at all costs and, instead, trade away only small concessions. Trump walked out of the summit in Hanoi in February 2019, and, bar a minor photoshoot later that year, US-North Korean dialogue has been flat ever since.

Pyongyang has shown absolutely no willingness to give in to Washington’s terms, and, as a result, Kim seemingly made the tactical decision not to provoke Trump into war-like posturing again, but to simply wait out the presidency. Trump will leave the White House empty-handed, when it comes to North Korea, just as presumed President-elect Biden comes in with a fresh slate.

While Biden is not about to repudiate Trump’s initially unhinged approach to Pyongyang, in which he threatened nuclear annihilation, there will be some differences, and not all will be pleasing to the Korean regime.

Being of a more liberal disposition, Biden will instantly distance himself from the ‘summit diplomacy’ advocated by his predecessor and affirm the traditional US stance that seeks to deny legitimacy to the North Korean leader due to his denial of human rights, not least because prior meetings have failed to generate meaningful results.

This does not mean he will not negotiate with Pyongyang, but talks will be at a lower level, and more emphasis will be placed on securing commitments from North Korea as a condition. It may resemble Barack Obama’s ‘strategic patience’ approach, of which, of course, Biden was a part.

So, what might this scenario lead to? Having struggled enough under tough sanctions and Covid-19, Kim is unlikely to create a provocation big enough to tighten the noose around him, such as a nuclear or intercontinental ballistic missile test, and his current capabilities are sufficient to give him some leverage.

However, that does not mean he will not resort to North Korea’s traditional medium of ‘crisis diplomacy’ to force the US and Seoul to negotiate. This could include a series of smaller missile tests, or other provocations. As a result, one cannot rule out a potential flashpoint when the timing is right.

The US-China conflict will play into this, too. The Biden administration, like Trump’s, is likely to demand China cooperate on the enforcement of sanctions, but one has to question what Beijing’s incentives will be to do so.

In 2017, China aimed to cooperate with Trump in order to salvage his goodwill and avert a crisis – an effort that ultimately failed. Yet Beijing may see an opportunity in leveraging North Korea for concessions from Biden, and, likewise, Pyongyang will also seek to use the changed international environment as a way to play on China’s insecurities.

This sets the stage for a potentially interesting pattern of events on the Korean peninsula next year. However, whatever happens, be sure of this: in any scenario, North Korea will not be surrendering its nuclear weapons in any capacity. The legacy of the Trump administration is that it has effectively established itself as a nuclear state, and there is no going back. In fact, Kim Jong-un will be looking to further secure that status, and every effort will be made to diplomatically outmanoeuvre Biden, just as he did his predecessor.