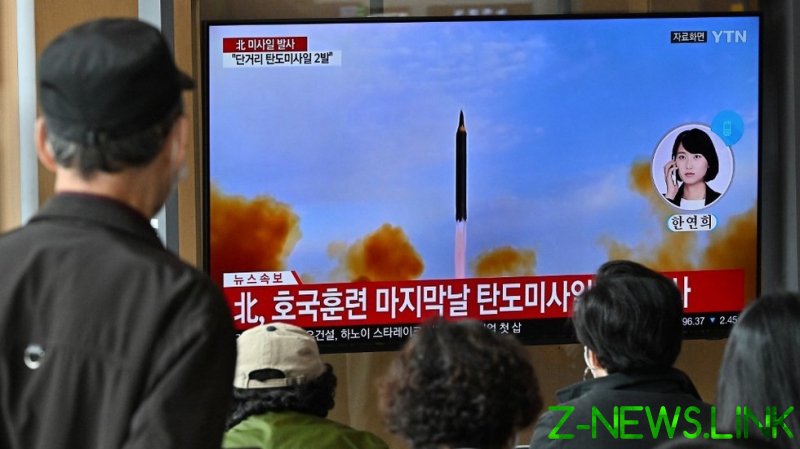 North Korea fired two short-range ballistic missiles off its coast on Friday, the latest in a series of launches since the start of this month, the South Korean military has said.

Seoul’s Joint Chiefs of Staff (JCS) said it “detected the launches from the Tongchon area in Kangwon Province.” The Tongchon range is located some 60 km (37 miles) from the inter-Korean border. It appears to be closer to South Korean territory than any other launch site used by Pyongyang this year.

South Korean forces are “maintaining a full readiness posture in close cooperation with the United States”, the JCS said in a text message sent to the media, according to South Korea’s Yonhap news agency.

The Japanese authorities later said the North Korean missiles fell into the Sea of Japan, outside Tokyo’s exclusive economic zone.

The test by Pyongyang comes on the final day of South Korea’s “Hoguk” amphibious naval exercises, which also involved an unspecified number of American troops. On Monday, Seoul and Washington are also set to kick off their joint “Vigilant Storm” drills, expected to involve more than 200 fighter jets.

North Korea has always expressed anger over such exercises, calling them a rehearsal for an invasion of its territory. According to Pyongyang, its intensified ballistic missile tests in recent weeks were justified “countermeasures” to aggressive actions by South Korea and the US.

Seoul and Washington claim the launches were actually carried out in preparation for North Korea’s first nuclear test since 2017.

On Tuesday, South Korean President Yoon Suk-yeol told parliament: “it appears they [Pyongyang] have already completed preparations for a seventh nuclear test.” The US, South Korea and Japan warned the next day that such a move would be met with an “unparalleled” response.

Pyongyang placed a moratorium on nuclear tests in 2018 after the beginning of peace talks between North Korean leader Kim Jong-un and then-US President Donald Trump. But the negotiations soon stalled over Washington’s unwillingness to lift sanctions. Despite claiming it was ready to consider “some form of diplomacy” with North Korea, the Biden administration has so far failed to launch any meaningful dialogue with North Korea.

Last month, Kim declared his country an “irreversible” nuclear power, effectively signaling an end to negotiations on denuclearization of the Korean Peninsula. He said North Korea would put an emphasis on developing tactical nukes and was ready to conduct multiple atomic tests as part of the program.