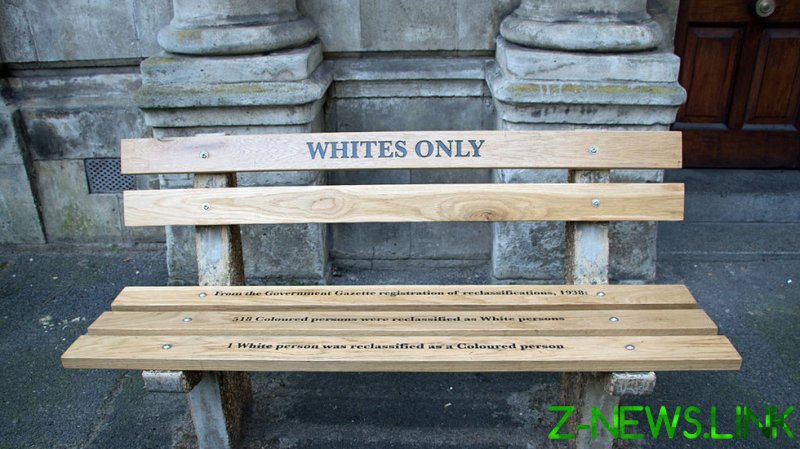 In the olden days, groups of white people who wanted to get together to talk race in North Carolina used to meet in the woods and burn crosses. Ku Klux Klan enclaves still exist in the state, but white supremacy has fallen out of fashion among the youth. Instead, those looking for a racially-segregated experience more fitting with the times can simply head to Elon University’s School of Education for a secret, whites-only meeting with a difference.

Instead of donning robes and reminiscing about the good old days of segregation, students at Elon can attend a “white caucus” to discuss their own “complicity” in “systemic oppression.”

The whites-only segregation here is okay, as it’s intended to avoid “retraumatiz[ing] people of color,” and instead of the complex codewords and handshakes of the Klan, students sign a confidentiality agreement “to not share anything outside of the group for any reason.” According to an email sent to students by the School of Education and published by the conservative Young America’s Foundation (YAF), white students were encouraged to attend as a matter of urgency.

You might have a few questions about all of this. First of all, what could they possibly be talking about in there?

Critical Race Theory and its teachings – that white people are born racist, that their refusal to apologize for this harms people of color, and that their achievements are a result only of “white privilege” – is already commonplace on campuses, on bookshelves, in government agencies, and in corporate boardrooms.

With even FBI agents forced to attend creepy self-flagellation sessions on the taxpayer’s dime, the students at Elon must be telling each other some genuinely far-out stuff to want to keep it hushed up (either that or they’re afraid of being sued by anti-CRT activists like Christopher Rufo).

Secondly, isn’t this all a bit racist?

Well, yes, and the university agrees. Elon University actually canceled the whites-only caucus, the YAF reported earlier this week, with the university claiming that, by excluding all other races, the caucus was breaking the school’s anti-discrimination rules. Note that the school didn’t mind that white people were gathering for self-hatred sessions and telling each other that they’re the devil. They just wanted minorities to be able to attend, if they’d be insane enough to do so.

And finally, who in their right mind would want to attend? Imagine a group of African-Americans in 1950s Alabama deciding among themselves that “the back of the bus really isn’t so bad.”

Why would any white student with a shred of self-respect want any part in this? It doesn’t take a Klansman to balk at the idea of willingly subjecting oneself to racial hatred. It’s a perfectly regular impulse for anyone whose brain hasn’t been fried by the toxic incarnation of liberalism currently in vogue in the US.

According to a 2017 survey, however, white liberals aged 18-34 are the only demographic group to exhibit bias against their own race. Regardless of their ideology, all other ethnic groups either don’t care or tend to favor their own kind, with young blacks the proudest of their racial group. Young white liberals, on the other hand, have seemingly lapped up the Marxist brew piped down their throats on campus with glee.

Where this all ends up is unclear, as never before in history has a race been the sole driver of its own denigration. For the Elon students now forbidden from hating themselves, however, when your closed-door anti-racism activism falls foul of basic civil rights rules, then it’s probably time to put down Robin DiAngelo and find a new hobby.