Nonsense and Insensibility: Trying to rewrite Jane Austen for ‘links’ to slavery shows the idiocy of woke historical revisionism 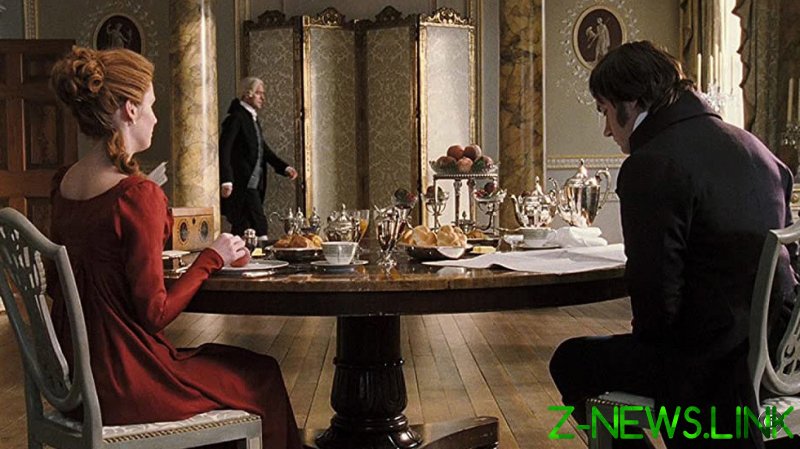 What good does it do anyway, all this picking away at the past?

‘Pride and Prejudice’ author Jane Austen and her characters often drank tea and plopped sugar into their cups. They also wore cotton. All products linked to the slave trade. Yup, that’s true.

Ah, but her father, Rev. George Austen, you see – at one time he was the trustee of a sugar plantation on the Caribbean island of Antigua. Her dad, though – I’m just saying  – didn’t actually write any of those books beloved by millions for over 200 years.

Plus Britain, at the time she wrote her novels about the landed gentry at the end of the 18th century, was the biggest colonial power the world had ever seen. So, plenty of people  – most even, I guess – from the middle classes or above in that era no doubt had some links to practices and behaviours that run counter to the culture of today. Of course they did.

Again though, so what?

The author’s house in Chawton, Hampshire, where she wrote ‘Emma’ and ‘Mansfield Park’, is now the Jane Austen’s House Museum and future displays will analyse all this colonial era stuff.

As Lizzie Dunford, the museum’s director, told the Telegraph: “This is just the start of a steady and considered process of historical interrogation. The slave trade and the consequences of Regency-era Colonialism touched every family of means during the period. Jane Austen’s family were no exception.”

Tea drinking and that sedate society of the middle classes of her era is pretty much what most of her books are all about. Her novels – ‘Pride and Prejudice’, ‘Sense and Sensibility’, ‘Persuasion’, ‘Northanger Abbey’ – must have been pretty damned good though, if you think about it. They have most certainly withstood the proverbial test of time. She died in 1817.

And there are signposts all over Hampshire, proudly declaring “Welcome to Jane Austen Country.” Protesters will no doubt have them on a list so they can be toppled or recycled in the name of some Hampshire-born activist nobody has ever heard of.

Austen, of course, isn’t the first to face this current obsession for navel gazing. And she won’t be the last, that’s for sure. Winston Churchill’s home Chartwell made it onto a National Trust hit list of historic places linked to “colonialism and slavery” due to the former prime minister’s role in the Bengal famine and his opposition to Indian independence. Rudyard Kipling and William Wordsworth’s homes also made the list due to their links to the empire.

The Trust’s list also, of course, came out after the Black Lives Matter protests last year. Researchers found that one third of its protected sites had ties to the “sometimes-uncomfortable role that Britain, and Britons, have played in global history.”

Yet again, so what? I mean, really, who cares? What difference does it make? Are they gonna try to cancel Churchill, Wordsworth, Kipling and Austen? And even if they did, what good would it do? Who gains from all this?

And how far do the woke mob wanna go back into the fat folds of time? The Roman emperors did more than a few nasty things, and let’s not get started on the Mongols, the Assyrians and myriad other cruel and bloodthirsty regimes in history. Dig back far enough and everybody is almost certainly linked by blood to a psychopathic killer, a rapist or  – worse to the warped woke abyss we seem to be falling into – an ancestor who may have been slightly offensive to a transgender woman.

Not only does the woke mob want to control and police every facet of the living, they’re also trying to get their hands around the dead: Austen, Churchill, Wordsworth et al.

Oh, plus they want control over those who were never actually alive in the first place – the characters in her books: Mr. Darcy, Sir Walter Elliott, Elizabeth Bennett, the Dashwoods. They do know that none of these people ever actually breathed any air, polluted or otherwise?

And what about future authors, what about as yet unwritten books and characters? Writers these days are becoming impotent or simply have no chance of getting their work published because their characters don’t pass the woke test.

All future books will be populated by characters that must fit an ideal template and never give offence. But they would not be familiar to anyone who actually lives in the real world and bumps and rubs up against real people. No writer will dare take a risk for fear of being shouted down and chased through Twitter and Facebook and Instagram by wokeists wielding their digital pitchforks.

Lionel Shriver, the author of We Need To Talk About Kevin, warned in a piece in Prospect magazine a while ago that “politically correct censorship” risks turning the world of fiction into a “timid, homogeneous, and dreary” place.

And that means no more Ernest Hemingways, Stephen Kings, Cormac McCarthys. No more Jane Austens. And William Shakespeares? Forget it.