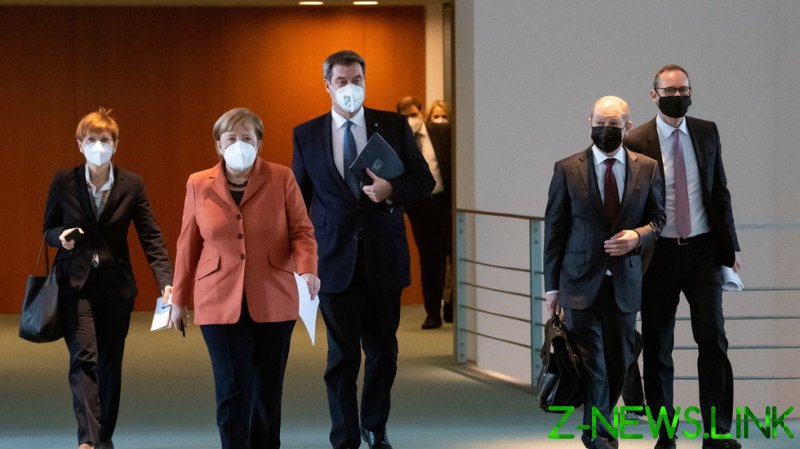 The new rules will take effect on December 16 and last until January 10. All non-essential shops and services, like hair salons, will be shuttered. Schools are urged to send students home and continue lessons online, while employers are asked to allow workers to work remotely.

Daycare centers will also close, but parents will be able to take paid holidays in order to look after their children. People will be banned from drinking alcohol in public and buying fireworks for New Year’s Eve.

“We were forced to act and are acting now,” Merkel told reporters, explaining that the existing measures were “not enough.”

Germans have been living under a partial national lockdown, and it was widely expected that tougher restrictions would be announced.

Officials previously agreed to allow some leniency during the festive season. But regional leaders later called for an urgent summit in order to persuade Merkel to adopt stricter rules in the weeks leading up to Christmas.

The head of Bavaria, Markus Soeder, said that Germany “would quickly become the ‘problem child’ of all of Europe,” unless urgent steps are taken against Covid-19.

Under the new rules, close family members will still be permitted to celebrate together from December 24 to 26.

The number of new Covid-19 cases hit a record for a second day in a row in Germany, when 29,875 new infections were reported by the Robert Koch Institute on Friday.

The daily death toll nearly topped 600 on Friday, just days after Merkel delivered an impassioned speech in parliament, saying that 500 deaths per day in Germany was “a price too high” to be paid for allowing Christmas shopping.

At the same time, doctors and nurses have been telling German media that hospitals were on the verge of “collapse” due to the renewed influx of people with severe Covid-19 symptoms. “We have areas where the ICU capacity just has left 5 to 10 percent open beds. That’s not enough to cover the broad range of severely ill patients,” Uwe Janssens, the head or of the German Association of Critical Care and Emergency Medicine (DIVI), told Deutsche Welle.