Home / WORLD / Nobody’s ‘coming after your guns,’ says Kamala Harris, who campaigned on coming after guns

Nobody’s ‘coming after your guns,’ says Kamala Harris, who campaigned on coming after guns 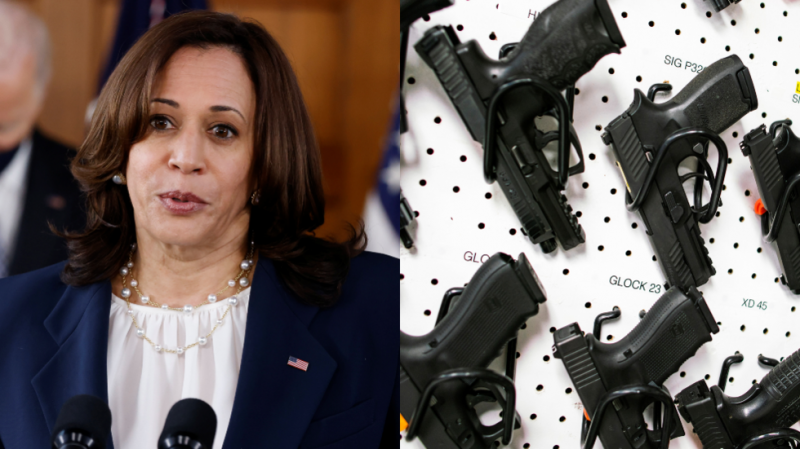 Speaking to CBS News on Wednesday, Harris urged Congress to pass a pair of bills that would strengthen background checks for weapon purchases. The bills were recently passed by the Democrat-controlled House, but need a 60-vote majority in the Senate. With control of the Senate split 50-50 between Democrats and Republicans, they are unlikely to pass, even after two high-profile mass shootings in the past two weeks.

Harris scolded Republicans who equate gun control with “getting rid of the Second Amendment,” telling them to “stop pushing the false choice that this means everybody’s trying to come after your guns, that is not what we’re talking about.”

However, gun owners and Second Amendment advocates are unlikely to be moved by her promise not to “come after” their guns. For one thing, Joe Biden explicitly vowed on the campaign trail to rid America of “assault weapons,” a term ascribed by Democrats to hundreds of weapons, from certain shotguns to pistols to the ubiquitous AR-15 rifle. Asked in 2019 by CNN’s Anderson Cooper if “a Biden administration… will come for my guns?” Biden answered: “Bingo, you’re right if you have an assault weapon… they should be illegal, period.”

His plan to “end our gun violence epidemic” includes promises to ban the sale of these weapons by reinstituting a Clinton-era law, to register all existing weapons on a federal database, to implement a mandatory buyback scheme, and to ban all online firearms sales. However, these actions are the purview of Congress, and Biden can push for them as much as he wants, but they ultimately won’t pass without Republican votes in the Senate.

Both Biden and Harris are aware of this, hence their pleas to lawmakers. Biden can take executive action, and Press Secretary Jen Psaki said on Tuesday that he is “considering a range” of executive orders, but their scope is far more limited and temporary than any laws passed by Congress.

Yet before she was vice president, Harris announced during her own presidential campaign that she wouldn’t wait for Congress to act. She asserted in 2019 that she would ban the importation of AR-15 style rifles, mandate “near universal background checks,” implement mandatory buybacks, and make gun manufacturers criminally liable for mass shootings, all by executive order if necessary and within her first 100 days in office. When Biden stressed during a debate that she had “no constitutional authority” to do this, Harris responded: “Hey Joe, instead of saying ‘No, we can’t,’ let’s say ‘Yes, we can.’”

Harris was gung-ho about depriving Americans of their beloved AR-15s, as was fellow candidate Beto O’Rourke, a former Texas congressman. O’Rourke also campaigned on the idea of a mandatory buyback scheme, but drew far more attention than Harris after he said that taking Americans’ rifles is “exactly what we’re going to do… Americans who own AR-15s, AK-47s, will have to sell them to the government.”

While the conservative media and the gun lobby honed in on O’Rourke’s statement, Harris told reporters that compulsory buybacks were “a great idea,” and promised to do the same if elected.

However, campaign trail rhetoric is just that. Barack Obama tried and failed to reintroduce the Clinton-era assault weapons ban in 2013, but fell foul of Congress. Even though his party had a 55-45 majority in the Senate at the time, no Republicans could be convinced to break ranks and put the bill over the 60-vote threshold. In the absence of legislation, Obama fired off a slew of anti-gun executive orders in 2013 and again in 2016, which went some way toward strengthening background checks and strengthened enforcement of existing gun laws, but fell short of curbing the number of so-called ‘assaut weapons’ sold in the US.

As such, Biden and Harris may have every intention of getting these weapons off the streets, but barring a shakeup of Congress in next year’s midterm elections, gun owners and enthusiasts are safe, for now.