Home / WORLD / ‘Nobody likes to be funny anymore,’ says US college football coach after quipping his team should be EXECUTED (VIDEO)

‘Nobody likes to be funny anymore,’ says US college football coach after quipping his team should be EXECUTED (VIDEO) 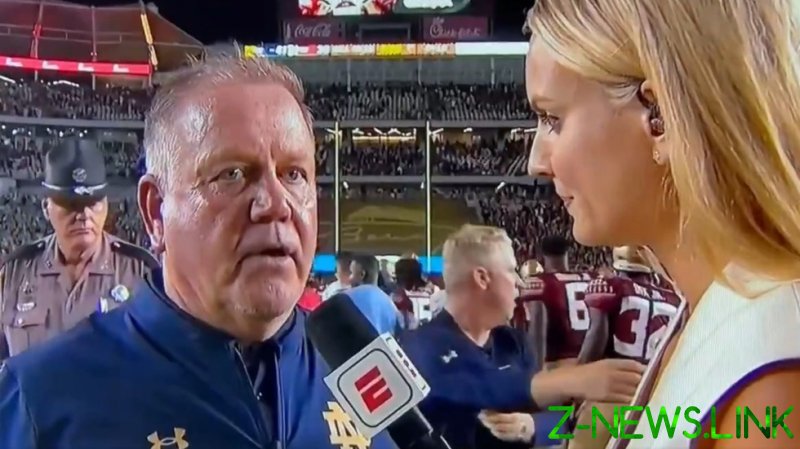 The top 10-ranked Notre Dame labored to a 41-38 overtime win at the Doak Campbell Stadium in Tallahassee, but things should have been much more comfortable after they held a 38-20 lead in the third quarter.

Unimpressed with what he’d just witnessed, Fighting Irish coach Kelly went for his killer line when asked for his thoughts in a post-game interview with Katie George.

“I’m in favor of execution. Maybe our entire team needs to be executed after tonight,” said Kelly casually.

Many were left wondering if their ears had deceived them, but no – Kelly really did say that his team’s lackluster efforts might be worthy of the death penalty.

But as the clip went viral – and some took Kelly’s words at face value – the reasoning behind the comments was soon cleared up: it was all just a joke.

In fact, Kelly was making a ham-fisted attempt at putting his own spin on the quip once used by former Tampa Bay Buccaneers coach John McKay.

In McKay’s case, he is said to have been asked by a reporter “what do you think of your team’s execution?” – before replying “I’m in favor of it.”

That was much sharper than Kelly’s attempted quip – but anyway, the Notre Dame coach was quick to clarify his comments before he had a baying mob of wokesters calling for him to be the one for the chop.

“I was kidding. It was tongue-in-cheek. It wasn’t funny?… I was talking and making a joke about it. It was taken serious? Are you people crazy?

“I was stealing one of [McKay’s] old quotes and being funny, because nobody likes to be funny anymore. If you want to take me to town on that, please do.”

Some people did just that – finding the comments in particularly bad taste considering a student videographer once died when a hydraulic lift fell over during treacherous weather conditions at a Fighting Irish practice session held by Kelly in 2010.

Others, though, simply took Kelly’s line for what it was – a poor attempt at parroting McKay.

“Everyone needs to Google John McKay and relax. It was a call back to an old joke,” read another comment.

Others deployed a barrage of memes to depict the 59year-old Kelly’s no-nonsense approach to coaching.