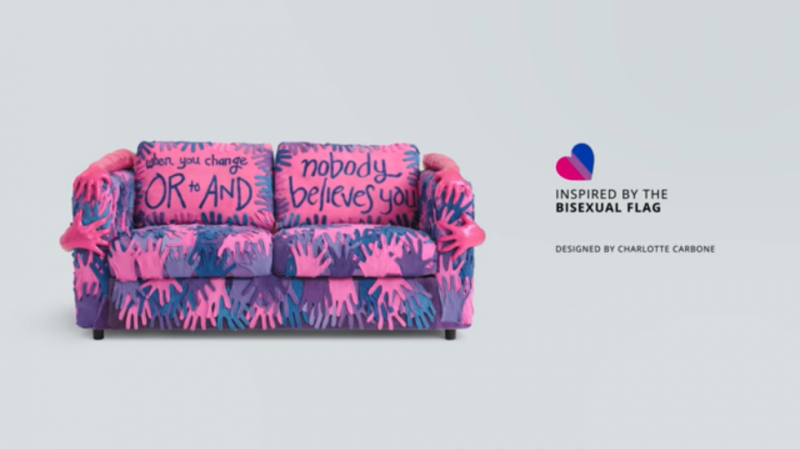 IKEA revealed the ‘Love Seats’ collection last week. Inspired by flags representing 10 different sexual identities, the one-off creations will not be sold to the public, but displayed in IKEA outlets across Canada beyond the end of Pride Month (and into ‘Pride Season,’ as it’s known in Canada).

Though the collection was announced last week, commenters online noticed something off with one of the loveseats on Monday. Decorated in the colors of the bisexual flag, the couch is adorned with disembodied hands, and its two cushions contain some puzzling text. One reads “when you change OR to AND,” while the other reads “nobody believes you.”

Commenters were perplexed. “I do not feel represented by this couch,” one bisexual Twitter user wrote. “I am, actually, quite terrified of this couch. I now live in fear of the IKEA bisexual sofa.”

The couch was designed by Charlotte Carbone, a “queer fashion designer,” and based on the story of Brian Lanigan, a bisexual youth poet. Lanigan appeared on Twitter on Tuesday to explain the origin of the text on the couch. “For those confused by the excerpt from the poem, the original full line is ‘it’s okay to love boys or girls, but when you change ‘or’ to ‘and’, nobody believes you,’” he stated. Lanigan added that the hands attached to the couch represent the crowd at one of his spoken-word gigs.

However, the bisexuality-inspired sofa wasn’t the only design to raise eyebrows on Twitter. “The asexual couch,” one commenter remarked, “looks like a vulva.” The “progress couch,” inspired by a recent redesign to the classic pride flag, “looks like hostile architecture made out of plastic flowers,” another commenter quipped.

Corporations pandering to the LGBT community during pride month is nothing new. IKEA managed to put its foot in its mouth twice this month, however. A group of black employees at an IKEA in Atlanta, Georgia, walked off the job earlier this month when the company served them a meal of fried chicken and watermelon – two racially stereotypical foods for African-Americans – on ‘Juneteenth.’ As clumsy as the execution was, IKEA stated that the menu was not designed to insult, rather to “honor the perseverance of Black Americans and acknowledge the progress yet to be made.”

Regarding the hubbub over the couches, perhaps IKEA should have taken a leaf out of the NFL’s book instead. The football league released a short commercial on Monday simply stating “football is gay,” “football is bisexual,” and “football is transgender,” among other LGBT buzzwords.