Home / policy / Nobel prize: Why the Ukraine democracy is possible, but in Russia no

Nobel prize: Why the Ukraine democracy is possible, but in Russia no 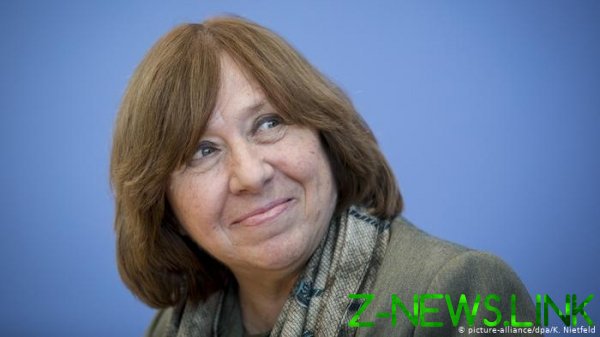 Svetlana Alexievich: Men are measured values and the future – for Greta

The winner of the Nobel prize for literature Svetlana Aleksievich in an exclusive interview with DW also explained why in Ukraine democracy is possible, and in Russia – no.

At the Stuttgart Opera’s premiere production of “Boris”, which were used texts from the book Svetlana Aleksievich “Time second hand”. “Boris” – not just a new Opera, and a fusion of past and present: “Boris Godunov” by Pushkin/Mussorgsky, Alexievich’s books and the music of Sergei Nevsky. After the premiere of DW correspondent asked the Nobel laureate for literature Svetlana Aleksievich about how she feels in the role of “novice librettist”.

Svetlana Alexievich: Sergey Nevsky miraculously cope with a fantastic amount of material. Although sometimes I wanted to have time to get used to the character, not to hurry. But this work was done by mostly young people. It’s a different vision, a different pace. Director, videomaker – all of them for 25 – 30 years. And I saw the look of another generation. That was interesting. The video is very interesting. Young guys in their own way feel. Sadly, of course, had the feeling that nothing changes in Russia. As said Osipov, the Russian novelist, in Russia in two days can change everything, for 200 years – nothing. I must say that Serge Nevskiy very accurately from the text chose what is important to me and what I hold dear.

– “Boris Godunov” Pushkin ends with the words “the People are silent”. The finale of Mussorgsky’s Opera is insane Boris. And it ends with the new “Boris”?

– Crazy universal! When I read today viskazivaniya some Russian politicians, the impression of the presence of the epidemic, such total madness. It’s not crazy loners presumptuous, and the madness of huge masses of people. When I read about the plans for the Church in Russia, or about how to relate to homosexuals, to people who want to live differently and live differently… it is scary when you realize that all of our education, reading disappeared. One of my friend, the journalist lived for a time in the DNR. When she says that she had to see there, it is scary. As instantly person peel off the cultural layers… There is, in DND, people in basements and tortured before killing. It’s the 16th century some!

– Speaking of rulers today, do you think that now on the mind of Putin?

– It seems to me, Putin, and Lukashenko is already a hostage himself, some of his ideas. After “jump” just does not work. Dictatorial regimes are cruel and against by these dictators. They have no lives! I remember wanted to know who was Lenin. And I read reminiscences of Lenin of different people, a volume of some I came across. Somehow he slept the worker, and this worker woke up at night, when I heard that the room where Lenin spent the night, someone walks. Worker went there and saw Lenin, who climbed on the bookshelves. Lenin turned and said, “I just don’t read this!” Human regret that, they say, life passed him by. He also became a hostage of his paranoid ideas.

– Probably, the cultural layer peel off with dictators. Lenin regretted unread books, but what do you think will feel sorry for Putin and Lukashenka?

They will regret that monarchy is not that they are not able to transmit the power of inheritance. And they would love that because they are tired of playing already, even in this primitive democracy, in which nobody believes, of course, but you have to follow the rules of the game. Of course, humanly sorry for the people who would have not lived your life. This is the most important thing people will spare from under the lid of the coffin, – that he lived his life. Well, the money. Well, billions, apartments, palaces… But does that make us happier and happier! Men are always measured on his own merits. But when people are already at high altitude, they have a better understanding of the price of all this. They understand that there are no friends, but from the present – only enemies.

The world continue to rule Putin, Lukashenka and the trumps. What about the young people? Whom is the future?

– Humanity is changing. I was recently in London, and met there with young people – environmental activists. Now one young man is ready to defend the rights of penguins, but not willing to protect human rights! Every year he somewhere goes to fight for the rights of some birds! These people no longer live on Earth and in Space. Humanity moves from the plane of history into Space. I can’t shake the feeling of another time, another generation, another aesthetics. The fact that we had some value for them is not so important. For them it’s a global world and global issues. The generation that grew up reading “Harry Potter”, otherwise understands the issues of good and evil. Future generation Greta, for their ideas, fears, attachments.

– Now and then information appears that “Alyosha” the paint is poured, it is still something to do with the monument to Soviet soldiers. But I just want to kneel before this guy, Ryazan and Belarus, which, despite everything, fought God knows where and leaving behind his beloved mother alone, defeated fascism… Not argue about our political men! Defeated fascism. But why not say that that fascism was possible to blame Stalin, his policy towards the Comintern, to the left of the Western intellectuals who believed in an alternative way of civilization development. Was such a naive belief at the time… And all this faith Stalin defeated. My father joined the Communist party at Stalingrad. So he always said that the idea was wonderful, but Stalin had betrayed her. I some time lived in Sweden, in Paris, I have seen what socialism is. It’s not something that we have been and called socialism. Socialism in the USSR is some kind of barracks, drenched with blood. But socialism is something completely different.

We don’t know, we didn’t realize until the end that this was the same with our peoples. And the truth was not allowed to say until now. And the archives are closed. The truth about the war closed. And for me – the truth is one: to kneel before this “Alesha”. Another truth we do not possess. This is Stalin’s idea was to liberate Europe and stay there. If he is gone from Europe, it would have been very different, “the Duchess”… Is a topic for a deep serious conversation. Until a new and free generation, we do not know and do not understand what happened. But how did this generation come from? Ukraine was the first “Maidan”, and these people were born a new generation of people capable of for a second “Maidan”, the third “Maidan”. In Ukraine in General, the rich democratic tradition, to recall the Sich. In Belarus it is not, there is a silent enduring. And in Russia once included “Stalin’s car”: the mechanism of fear makes conviction stand up on the strong side.