Home / WORLD / No wonder the Brexit talks are going so badly: BoJo and his Rule Britannia team actively want No Deal

No wonder the Brexit talks are going so badly: BoJo and his Rule Britannia team actively want No Deal 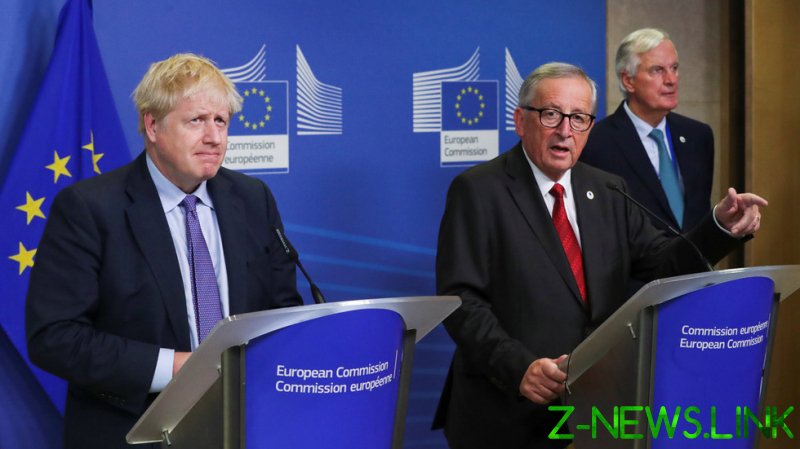 In certain circumstances, you trust others blindly. On a plane, you don’t ask the pilot to prove they’re capable of navigating the skies, you take a leap of faith. It’s the same when you’re wheeled into hospital and a surgeon stands over you, wielding a scalpel.

The British public – regardless if they voted Remain or Leave – are doing the same with their government and Brexit. But it’s becoming more apparent as every day passes that it has no genuine interest in making a deal with the EU.

The latest round of talks, the seventh so far, ended with the ironic agreement that nothing had been achieved. UK negotiator David Frost said: “We have had useful discussions this week but there has been little progress. The EU is still insisting not only that we must accept continuity with EU state aid and fisheries policy, but also that this must be agreed before any further substantive work can be done in any other area of the negotiation.”

Frost concedes that none of this was new to him; it’s been the EU’s position for some time. Yes, in any negotiation, one has to play cat and mouse to an extent to extract the maximum available. But only a fool would expect 27 nations to bend to the will of one.

The EU’s chief negotiator Michel Barnier was clearly dumbfounded at to why the British officials even bothered travelling to Brussels for talks. He said: “I simply do not understand why we are wasting valuable time. Too often this week it felt as if we were going backwards more than forwards.”

It’s now less than five months until Britain’s transition period ends, and there is no chance of this being reversed or a further extension being requested. Our permanent departure is happening, either with a deal or under unfavourable World Trade Organization tariffs.

And yet if the British government wanted to get things moving, it could. For some reason, though, it is holding out at the first hurdle, curiously over the fishing industry.

The UK imports 70 percent of the fish it eats and the industry makes up 0.12 percent of GDP, while only employing 0.1 percent of the national workforce. It’s a perplexing hill to choose to die on.

The reality? I think it’s a smokescreen and that Downing Street’s plan is to ensure No Deal. But it is unable to declare that without facing a torrent of outrage, so it’s forcing the EU’s hand.

After all, if the government really did want to see progress, why is Boris Johnson on holiday in Scotland, sleeping in a tepee, and not lending his voice to this?

With the UK set to be buffeted by its worst recession in 300 years, the chaos on January 1 2021 if the free flow of goods and services instantaneously stops will be horrific. Lorries full of fresh food will be stopped at the border, as an untested customs regime works out what to do.

Vital medicine shipments may be rejected as the paperwork isn’t valid. Contracts will be cancelled as overseas firms can no longer afford to buy British goods. No rational person could look at this impending gloom and refuse to budge. There’s brinkmanship and there is misdirection.

Frost’s accusation of the EU being “unnecessarily difficult” also jeopardizes future relations. By throwing out jabs, it only alienates our European neighbours even further. The truth is the 27 nations who will remain in the EU next year don’t need Britain. They have a proven framework that may not be a panacea of governance, but functions efficiently enough.

In contrast, every British citizen has no idea what things will look like for their day-to-day lives, or the value of their income.

Adopting WTO rules is not hard; that’s simple admin. It’s the physical effects that will hit hard. The UK witnessed empty shelves during a short period of Covid-19 panic buying. Trucks came over by the hundred from Europe to help solve that. Next time, under WTO, it will cost a lot more, so they won’t arrive in anything like the same sort of numbers.

Further adding to the problem is that Boris is surrounded by ministers like Michael Gove, Priti Patel and Jacob Rees-Mogg, who have on the Rule Britannia blinkers. To them, bowing down to anything other than Her Majesty, The Queen is bile inducing. Their pathetic concept of bravery and national pride is why they are willingly letting the Brexit talks go to hell in a handcart.

And their lower-profile backers are lauding it. Former MEP Ben Habib tweeted: “For goodness sake stop this national humiliation and cease negotiations.”

Fellow Brexit Party member Martin Daubney said of Barnier’s statement, “Translation: he isn’t getting his own way, and the U.K. isn’t being bullied. Let’s go WTO!”

Compromise is not weakness, but that’s how it is being projected.

This government knows what it’s doing and that’s rigging the talks to deliver No Deal. Why doesn’t it just come clean and admit that to the 68 million people whose future it is gambling with?